Difference between revisions of "Samadhi"

The rupa-jhānas are described according to the nature of the mental factors which are present in these states:

A core problem in the study of early Buddhism is the relation between dhyana and insight.[1][2][3] The Buddhist tradition has incorporated two traditions regarding the use of jhana.[2] There is a tradition that stresses attaining insight (bodhi, prajna, kensho) as the means to awakening and liberation. But it has also incorporated the yogic tradition, as reflected in the use of jhana, which is rejected in other sutras as not resulting in the final result of liberation.[1][4][3] The problem was famously voiced in 1936 by Louis de La Vallee Poussin, in his text Musila et Narada: Le Chemin de Nirvana.[5][note 2]

Schmithausen discerns three possible roads to liberation as described in the suttas,[6] to which Vetter adds the sole practice of dhyana itself, which he sees as the original "liberating practice":[7]

This problem has been elaborated by several well-known scholars, including Tilman Vetter,[1] Johannes Bronkhorst,[2] and Richard Gombrich.[3] Schmithausen[note 3] notes that the mention of the four noble truths as constituting "liberating insight", which is attained after mastering the Rupa Jhanas, is a later addition to texts such as Majjhima Nikaya 36.[6][2][1] Both Schmithausen and Bronkhorst note that the attainment of insight, which is a cognitive activity, cannot be possible in state wherein all cognitive activity has ceased.[2] According to Vetter and Bronkhorst, dhyana itself constituted the original "liberating practice".[7][2][9] According to Alexander Wynne, the ultimate aim of dhyana was the attainment of insight,[10] and the application of the meditative state to the practice of mindfulness.[10] According to Frauwallner, mindfulness was a means to prevent the arising of craving, which resulted simply from contact between the senses and their objects. According to Frauwallner, this may have been the Buddha's original idea.[11] According to Wynne, this stress on mindfulness may have led to the intellectualism which favoured insight over the practice of dhyana.[12]

According to Richard Gombrich, the sequence of the four rupa-jhanas describes two different cognitive states:

I know this is controversial, but it seems to me that the third and fourth jhanas are thus quite unlike the second.[13][note 4]

Alexander Wynne further explains that the dhyana-scheme is poorly understood.[12] According to Wynne, words expressing the inculcation of awareness, such as sati, sampajāno, and upekkhā, are mistranslated or understood as particular factors of meditative states,[12] whereas they refer to a particular way of perceiving the sense objects:[12]

Thus the expression sato sampajāno in the third jhāna must denote a state of awareness different from the meditative absorption of the second jhāna (cetaso ekodibhāva). It suggests that the subject is doing something different from remaining in a meditative state, i.e. that he has come out of his absorption and is now once again aware of objects. The same is true of the word upek(k)hā: it does not denote an abstract 'equanimity', [but] it means to be aware of something and indifferent to it [...] The third and fourth jhāna-s, as it seems to me, describe the process of directing states of meditative absorption towards the mindful awareness of objects.

In the early Buddhist texts, samadhi is also associated with the term samatha (calm abiding). In the suttas, samadhi is defined as one-pointedness of mind (Cittass'ekaggatā).[15] 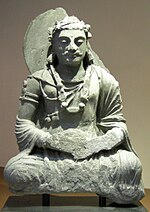 The earliest extant Indian Mahayana texts emphasize ascetic practices and forest dwelling, and absorption in states of meditative oneness. These practices seem to have occupied a central place in early Mahayana, also because they "may have given access to fresh revelations and inspiration."[16]

In the Indian Mahayana traditions the term is also to refer to forms of "samadhi" other than dhyana. Section 21 of the Mahavyutpatti records even 118 samadhi.[17] The Samadhiraja Sutra for example has as its main theme a samādhi called 'the samadhi that is manifested as the sameness of the essential nature of all dharmas' (sarva-dharma-svabhavā-samatā-vipañcita-samādhi).[18][note 6] 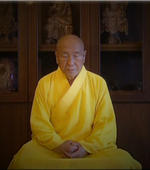 Indian dhyana was translated as chán in Chinese, and zen in Japanese. Ideologically the Zen-tradition emphasizes prajna and sudden insight, but in the actual practice prajna and samādhi, or sudden insight and gradual cultivation, are paired to each other.[19][20] Especially some lineages in the Rinzai school of Zen stress sudden insight, while the Sōtō school of Zen lays more emphasis on shikantaza, training awareness of the stream of thoughts, allowing them to arise and pass away without interference.