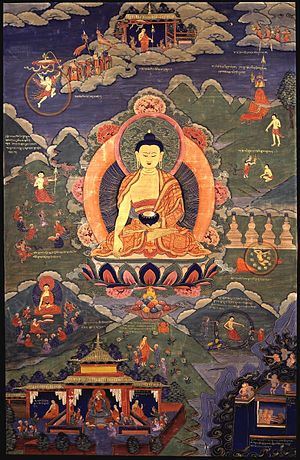 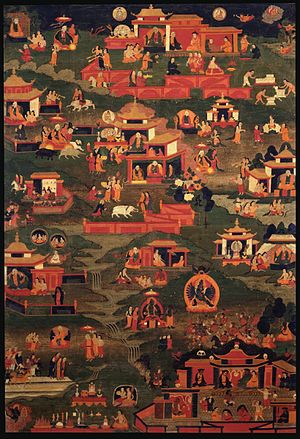 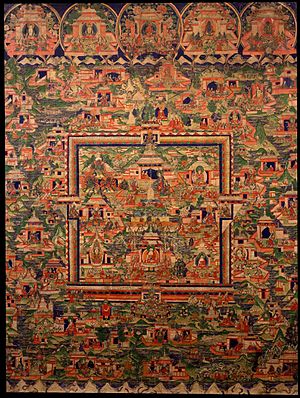 [Shenrab Miwo] occupies a position very similar to that of Śākyamuni in Buddhism, but... we have no available [or pre-10th century] sources with which to establish his historicity, his dates, his racial origin, his activities, and the authenticity of the enormous number of books either attributed directly to him or believed to be his word."[1]

The story of Tonpa Shenrab was revealed in a fourteenth century terma of Loden Nyingpo.[2]

The name Shenrab Miwo is in the Zhang-Zhung language, which is a relative of Old Tibetan; while many suggestions have been put forward as to its meaning, it appears to be the Zhangzhung word "bodhisattva" (equivalent to Tibetan shégya sempa, Wylie: shes rgya sems dpa').[3]

Shenrab's life according to Bon traditions

According to Bon terma, Tonpa Shenrab predates Gautama Buddha. It is held that Tonpa Shenrab first studied the Bon doctrine in Tagzig Olmo Lung Ring, at the end of which he pledged to Shenlha Okar, the god of compassion, that he would guide the peoples of this world to liberation.

Like Gautama, Tönpa Shenrab was of royal birth. Tonpa Shenrab renounced his royal inheritance at the age of thirty-one to travel the path to enlightenment. Tonpa Shenrab embraced the life of a renunciate and commenced austerities, spreading the doctrine of Bon; at length, he arrived in the land of Zhangzhung near what is widely held to be Mount Kailash.

Accounts of Tonpa Shenrab's life are to be found in three principal sources, the Dodü (Wylie: mdo 'dus), Zermik (Wylie: gzer mig), and Ziji (Wylie: gzi brjid). The first and second of the accounts are held to be terma discovered by tertön in the 10th or 11th century; the third is part of the oral lineage (Wylie: snyan brgyud) transmitted from teacher to disciple.

The Four Portals and the Fifth, the Treasury

The doctrines taught by Tönpa Shenrab are generally classified variously, two being most common. In the first, The Four Portals and the Fifth, the Treasury (sgo bzhi mdzod lnga), the:

The Nine Ways of Bon

The second classification, the Nine Ways of Bon (bon theg pa rim dgu) is as follows—the:

The nine ways can also be classified into three groups, the:

The Bon canon comprises more than two hundred volumes, classified in four categories: the Sutras (mdo), the Perfection of Wisdom Teachings ('bum), the Tantras (rgyud) and Knowledge (mdzod). Besides these, the Bon canon includes material on rituals, arts and crafts, logic, medicine, poetry and narrative. The "Knowledge" section concerning cosmogony and cosmology, though in some respects unique to Bon, shares a more than passing resemblance to Nyingma (rnying ma) doctrines.