Śrīmālādevī Siṃhanāda Sūtra (T. Lha mo dpal phreng gi seng ge’i sgra’i mdo ལྷ་མོ་དཔལ་ཕྲེང་གི་སེང་གེའི་སྒྲའི་མདོ་; C. Shengman shizihou yisheng da fangbian fangguang jing 勝鬘師子吼一乘大方便方廣經), or Sutra of the Lion’s Roar of Queen Śrīmālā, is an early Mahayana sutra belonging to the Tathāgatagarbha sūtras that teaches the doctrines of Buddha-nature and "One Vehicle" through the words of the Indian queen Śrīmālā.[1] After its composition, this text became the primary scriptural advocate in India for the universal potentiality of Buddhahood.[2]

This sutra was especially influential in East Asian Buddhism.[3] Over twenty commentaries on this text were composed in the Chinese language.[4]

This text is included in the Ratnakuta Sutra within the Tibetan canon. 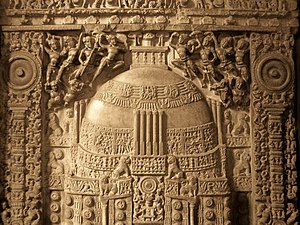 A complete Sanskrit version of this text is no longer extant,[8] but extensive quotations are found in the Sanskrit text of the Ratnagotravibhāga as well as some recently discovered fragments conserved in the Schøyen Collection.

The text was translated into Tibetan with the title: ལྷ་མོ་དཔལ་ཕྲེང་གི་སེང་གེའི་སྒྲའི་མདོ། (lha mo dpal phreng gi seng ge'i sgra'i mdo; The Lion's Roar of Śrīmālādevī). This version has yet been translated into English.[9]

The Śrīmālādevī Siṃhanāda Sūtra teaches the reality of an ultimate, immaculate consciousness within each living being, which is the Buddhic "Dharmakāya" (essence of Truth), which is temporarily obscured by the kleshas. This Dharmakāya, when viewed as intrinsically free from spiritual ignorance, is said to constitute eternity, bliss, the self, and purity in their perfect state. The use of the word "self" in this sutra is in a way unique to this class of sutra. The great Queen Śrīmālā, who according to this text is empowered by the Buddha to teach the Dharma, affirms:[10]