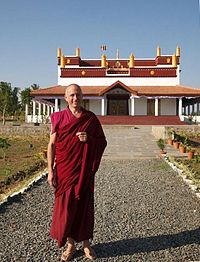 Khen Rinpoche Nicholas Vreeland was the first western monk to be made abbot of a major Tibetan Buddhist monastery,[1] Rato Dratsang, in Karnataka, India

In addition to its use in a Christian context, abbot is a term used in English-speaking countries for a monk who holds the position of administrator of a Buddhist monastery or large Buddhist temple.[2] In Buddhist nunneries, the nun who holds the equivalent position is known in English as the abbess.

The English word "abbot" is used instead of all the various words that exist in the languages of the countries where Buddhism is, or was historically, well established.

The administrative duties of an abbot or abbess include overseeing the day-to-day running of the monastery.[2][3] The Abbot or Abbess also has spiritual responsibility for the monastics under their care, and is required to interact with the abbots or abbesses of other monasteries.[4]

Languages other than English

Asian countries where Buddhism is still widely practiced have words in their own languages for the abbot of a Buddhist monastery or large temple:

The abbot of the Sōji-ji, temple of Zen Buddhism, Tsurumi-ku, Yokohama, Japan is a Zenji (Zen master).

In Zen Buddhism, the most commonly used Japanese words for the abbot of a large Zen temple or Zen monastery are juji[7] and choro.[2]

The abbot of a Tibetan Buddhist monastery is known as the Khenpo. This means "the one who gives the monks vows". The abbot is addressed as, and referred to, as "Khen Rinpoche". Another word used for more senior abbots is Khenchen, which means senior khenpo.[8]