From Encyclopedia of Buddhism
(Redirected from Abhidhamma)
Jump to: navigation, search

Abhidharma (Skt.; Pal. Abhidhamma; Tib. ཆོས་མངོན་པ་, མངོན་པ་, chö ngönpa, Wyl. chos mngon pa) — refers to a set of texts developed by the early Buddhist schools and the system of thought that is presented in those texts.[1] The Abhidharma texts define many of the topics mentioned in the Buddha’s teachings (sutras), and arrange them into classifications, such as the five skandhas, the twelve ayatanas, the eighteen dhatus, and so on, thereby providing tools for generating a precise understanding of all experience.

“...an in-depth study, both analytically and experientially, of what makes up the entire universe, the person, and their world. [The Abhidharma] speaks about different patternings of what make up this entire universe, for the sole purpose...of helping beings along the path to the cessation of suffering.[2]

The Abhidharma (Pali: Abhidhamma) philosophy developed after the Buddha passed away, in an attempt to organize and systematize the teachings of the Buddha. As one contemporary scholar explains:

During the first two centuries following the Buddha’s parinibbāna there took place, within the early Buddhist community, a move towards a comprehensive and precise systematisation of the teachings disclosed by the Master in his discourses. The philosophical systems that emerged from this refined analytical approach to the doctrine are collectively called the Abhidhamma. Both the Theravāda and the Sarvāstivāda, the two major conservative schools in the early Sangha, had their own Abhidhammas, each based on a distinct Abhidhamma Piṭaka. It is likely too that other schools had also developed philosophical systems along similar lines, though records of them did not survive the passage of time.[3]

It is customarily assumed that the multiple ancient Buddhist schools transmitted their own versions of Abhidharma collections, but only two complete canonical collections are preserved, representing two schools: the Sarvāstivāda, who emerged as an independent school from within the Sthaviras around the second or first century BCE, became dominant in north, especially northwest India, and spread to central Asia; and the Sinhalese Theravāda, a branch of the Sthaviras that spread out in south India and parts of southeast Asia. These two extant collections comprise the third of the “three baskets” (Skt., tripiṭaka, Pali, tipiṭaka) of the Buddhist canon.

The exegetical traditions of the Sarvāstivāda and Theravāda understand their respective canonical Abhidharma to consist of a set of seven texts, though each school specifies a different set of texts.[4] 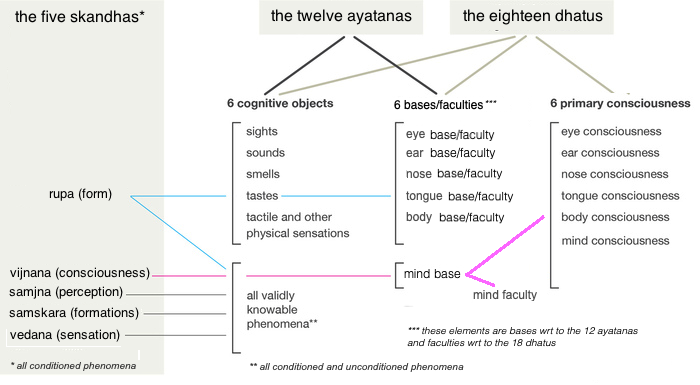 The abhidharma tradition presents multiple methods with which to analyze the components of an individual and their relationship to the world. Three commonly used modes are:[5][6][7][note 1]

These different methods have been described as "wisdom categories",[5] "sets of phenomena",[6] "modes of analysis",[7] etc.

Now the purposes for which Buddhism resorts to these analyses are varied. For instance, the main purpose of the khandha-analysis is to show that there is no ego either inside or outside the five khandhas which go to make up the socalled empiric individuality. None of the khandhas belongs to me (n’etaṃ mama), they do not correspond to “I” (n’eso’ham asmi), nor are they my self (n’eso me attā). [7] Thus the main purpose of this analysis is to prevent the intrusion of the notions of “mine,” “I,” and “my self” into what is otherwise an impersonal and egoless congeries of mental and physical phenomena. On the other hand, the analysis into eighteen dhātus is often resorted to in order to show that consciousness is neither a soul nor an extension of a soul-substance but a mental phenomenon which comes into being as a result of certain conditions: there is no independent consciousness which exists in its own right.[7]

The twelve ayatanas are another scheme for analyzing the workings of the mind. They "include all validly knowable phenomena, both nonstatic and static."[6]

Within the Abhidharma, the mind is often explained in terms of two aspects:

Mental factors (Skt. caitasika) are defined as aspects of the mind that apprehend the quality of an object, and that have the ability to color the mind. The mental factors are categorized as formations (Skt. saṅkhāra) concurrent with mind (Skt citta).[11][12]

The Abhidharma traditions define the basic elements (or building blocks, or mental and emotional factors) of ultimate reality. These basic elements are said to describe everything that truly exists, "in all of its particularity and variety."[13]