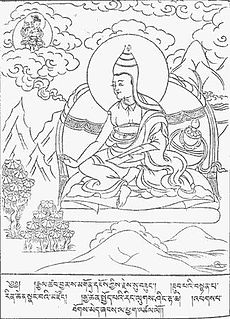 Abhisamayālaṃkāra (T. མངོན་རྟོགས་རྒྱན་, mngon rtogs rgyan), or Ornament of Clear Realization, is a treatise of the Sanskrit tradition on the Mahayana path.

In Tibetan Buddhism, the Abhisamayalankara is regarded as one of the five treatises that were directly revealed to Asanga by the future Buddha Maitreya. It is considered a commentary on the hidden meaning of the Prajnaparamita Sutras, describing the entire journey of the bodhisattva, from the generation of bodhichitta to the attainment of buddhahood.

This text is studied within the Tibetan monastic universities of all Tibetan lineages. Within the Gelug school, it is one of five principal works studied in the geshe curriculum. Within the Nyingma school, it is included among the so-called "thirteen great texts", which form the core of the curriculum of the Nyingma monastic universities. In the Karma Kagyü lineage, it is considered as one of the eight great treatises.

The Abhisamayālaṃkāra, or Ornament of Clear Realization, is one of the five treatises of Maitreya, which are all greatly renowned and thoroughly studied in all schools of mahāyāna Buddhism throughout the world. In particular, the Abhisamayālaṃkāra is one of the key texts emphasized in the curricula of all four schools of Tibetan Buddhism. In the Karma Kagyü lineage it is considered as one of the eight great treatises. This text lays out the obstacles and antidotes with regard to the experiences and realizations of the paths and bhūmis of bodhisattvas in detail. If you want to check out the challenges and experiences of an individual’s journey to enlightenment, this is a perfect guide. It is an indispensable manual for any practitioner treading on the mahāyāna path.

In the Abhisamayālaṃkāra Maitreya explains the stages of the realizations reached through the five paths, which lead to the attainment of the three enlightened states of śrāvakas, pratyekabuddhas, and bodhisattvas. The basic structure of the text consists of eight main topics that are further expanded into seventy points. The first three topics are what are to be realized: (1) the knowledge of all aspects, (2) the knowledge of the path, and (3) the knowledge of entities. These are the realizations to be achieved by the three noble ones—completely awakened buddhas, bodhisattvas, and śrāvaka-pratyekabuddhas. The second four topics are the skillful applications toward that end: (4) the complete training in all aspects, (5) the culminating training, (6) the serial training, and (7) the instantaneous training. These are the paths of the realizations through which the minds of bodhisattvas are led to enlightenment. The final point is the fruition, (8) the dharmakāya, or buddhahood. This is the result of the mahāyāna path that encompasses the four kāyas of full enlightenment.[1]

The text is divided into eight topics.[2]

These eight topics are further divided into seventy points.[3]

Arousing bodhicitta is: For the sake of others,
Longing to attain complete enlightenment.[4]

In this, there is not a thing to be removed,
Nor the slightest thing to be added.
It is looking perfectly into reality itself,
And when reality is seen, complete liberation.[5]