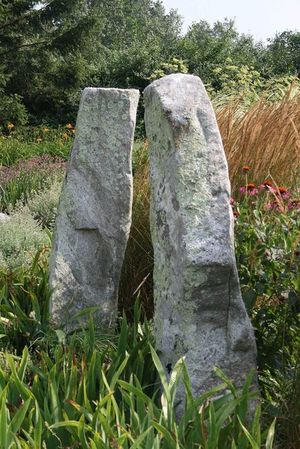 A metaphor for adhimoksha is a stone pillar, since it keeps the mind from moving from the object.

Adhimoksha (Skt. adhimokṣa; P. adhimokkha; T. mos pa; C. shengjie) is translated as "intensified interest," "decision," "firm conviction," etc. It is a mental factor that keeps the mind focused on an object without straying to another object.[1][2]

Within the Abhidharma teachings, adhimoksha is identified as:

The Visuddhimagga ( XIV, 151) gives the following definition of adhimokkha:

The act of resolving is resolution. It has the characteristic of conviction. Its function is not to grope. It is manifested as decisiveness. Its proximate cause is a thing to be convinced about. It should be regarded as like a boundary-post owing to its immovableness with regard to the object.[3]

The word adhimokkha means literally the releasing of the mind onto the object. Hence it has been rendered decision or resolution. It has the characteristic of conviction, the function of not groping, and manifestation as decisiveness. Its proximate cause is a thing to be convinced about. It is compared to a stone pillar owing to its unshakable resolve regarding the object.[4]

It is an awareness by which one stays with what the mind [yul-can] has logically established as this is so and not otherwise.[2]

Firm conviction (mos-pa) focuses on a fact that we have validly ascertained to be like this and not like that. Its function is to make our belief that a fact is true (dad-pa) so firm that others’ arguments or opinions will not dissuade us. For Vasubandhu, this mental factor means regard. It merely takes its object to have some level of good qualities – on the spectrum from no good qualities to all good qualities – and may be either accurate or distorted.[6]