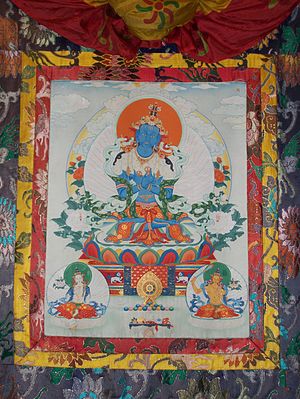 The 14th Dalai Lama states: "I understand the Primordial Buddha, also known as Buddha Samantabhadra, to be the ultimate reality, the realm of the Dharmakaya-- the space of emptiness--where all phenomena, pure and impure, are dissolved. This is the explanation taught by the Sutras and Tantras."[3]

The term appears in tantric literature, most prominently in the Kalachakra, where the term is interpreted as either "first buddha" or "primoridal buddha."[2]

In Tibetan Buddhism, the term ādibuddha is often used to describe Samantabhadra, Vajradhara or Kalachakra.[2][4] In East Asian Mahayana, the ādibuddha is typically considered to be Vairocana.[2]

Alex Wayman notes that the Pradipoddyotana, a tantric commentary, states that the "three diamonds" are the three mysteries of Body, Speech, and Mind. Wayman further writes: "Tsong-kha-pa's Mchan-'grel explains the "lord of body": displays simultaneously innumerable materializations of body; "lord of speech": teaches the Dharma simultaneously to boundless sentient beings each in his own language; "lord of mind": understands all the knowable which seems impossible.[1]