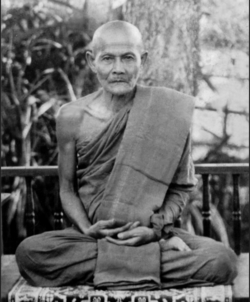 Ajahn Mun Bhuridatta (1870–1949) was a Thai bhikkhu who is credited, along with his mentor, Ajahn Sao Kantasīlo, with establishing the Thai Forest Tradition that subsequently spread throughout Thailand and to several countries abroad.

Ordained as a monk in 1893, he spent the remainder of his life wandering through Thailand, Burma, and Laos, dwelling for the most part in the forest, engaged in the practice of meditation. He attracted an enormous following of students and, together with his teacher, Sao Kantasīlo (1861–1941) established the Thai Forest Tradition (the kammaṭṭhāna tradition) that subsequently spread throughout Thailand and to several countries abroad. He died at Wat Suddhavasa, Sakon Nakhon Province.

Ajaan Mun's mode of practice was solitary and strict. He followed the vinaya (monastic discipline) faithfully, and also observed many of what are known as the 13 classic dhutanga (ascetic) practices, such as living off alms food, wearing robes made of cast-off rags, dwelling in the forest and eating only one meal a day. Monks following this tradition are known as thudong, the Thai pronunciation of this Pali word.

Searching out secluded places in the wilds of Thailand and Laos, he avoided the responsibilities of settled monastic life and spent long hours of the day and night in meditation. In spite of his reclusive nature, he attracted a large following of students willing to put up with the hardships of forest life in order to study with him.