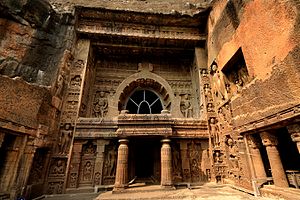 The Buddhist Caves in Ajanta are approximately 30 rock-cut Buddhist cave monuments dating from the 2nd century BCE to about 480 CE in the Aurangabad district of Maharashtra state in India.[1][note 1] The caves include paintings and rock-cut sculptures described as among the finest surviving examples of ancient Indian art, particularly expressive paintings that present emotions through gesture, pose and form.[3][4][5]

The caves were built in two phases, the first starting around the 2nd century BCE and the second occurring from 400 to 650 CE, according to older accounts, or in a brief period of 460–480 CE according to later scholarship.[6] The site is a protected monument in the care of the Archaeological Survey of India,[7] and since 1983, the Ajanta Caves have been a UNESCO World Heritage Site.