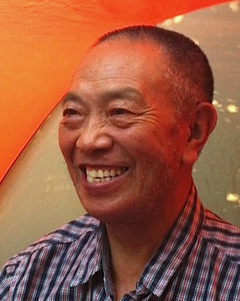 Alak Zenkar Rinpoche Tupten Nyima (Tib. ཨ་ལགས་གཟན་དཀར་རིན་པོ་ཆེ་ཐུབ་བསྟན་ཉི་མ་, Wyl. a lags gzan dkar rin po che thub bstan nyi ma) aka Tudeng Nima (b. 1943) is a scholar and teacher in the Nyingma school of Tibetan Buddhism. He was born in Eastern Tibet, and recognized as a tulku at an early age. He has studied with many eminent teachers from the Nyingma school.

From 1999, he spent periods in New York. He was a senior research scholar at Columbia University in the East Asian Institute, and also worked periodically with the Nitartha Organization in Vancouver on a project to compile a dictionary of terminology for the eight chariots of the practice lineage.

He is the Director and Founder of the Project for Searching and Making Available Rare Texts in Chengdu China. In addition, he compiled a dictionary of terms from the Gesar epic in Tibetan and Chinese. He was the co-founder, vice-principal and Professor of Tibetology at the Sichuan Tibetan Language School in Chengdu, Sichuan, where he established a school for advanced studies in Tibetan language and culture.