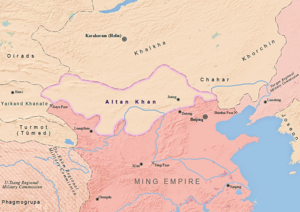 The region ruled by Altan Khan as of 1571 AD

Altan Khan of the Tümed (1507–1582; Mongolian: Алтан хан; Chinese: 阿爾坦汗) was the leader of the Tümed Mongols[1][2][3], Shunyi Wang (Prince of Shunyi, Chinese: 顺义王) of Ming dynasty China,[1] and de facto ruler of the western tribes of the Mongols.

Altan Khan is particularly remembered for establishing ties between Mongolia and the religious leaders of the Tibetan Gelug order. Altan Khan invited the 3rd Dalai Lama to Tümed and referred to him as "Dalai" Lama, using the Mongolian term "dalai", meaning ocean. He thus provided the name for the lineage of Dalai Lamas that were to become the temporal leaders of Tibet.