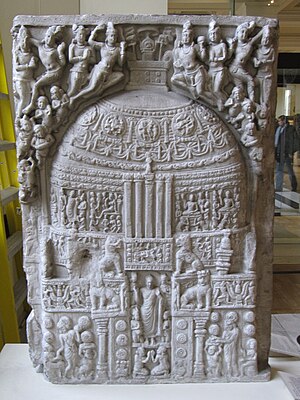 Depiction of the stupa, from the site

Ruins of the stupa 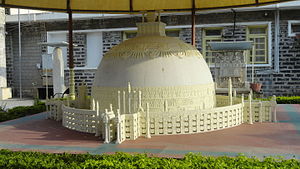 A model of the original stupa, as imagined by archaeologists

The Amarāvati Stupa, popularly known as the great stūpa at Amarāvathi, is a ruined Buddhist monument, probably built in phases between the third century BCE and about 250 CE, at Amaravathi village, Palnadu district, Andhra Pradesh, India. The site is under the protection of the Archaeological Survey of India. The campus includes the stūpa itself and the Archaeological Museum.[1]

The important sculptures from the site are now in a number of museums in India and abroad; many are considerably damaged. The great majority of sculptures are in shallow relief, and the original sculptures do not include large iconic Buddha figures. The largest collections are the group in the Government Museum, Chennai, that in the Amaravati Archaeological Museum, and the group in the British Museum in London. Others are given below.

Name of the site

The name Amaravathi is relatively modern, having been applied to the town and site after the Amareśvara Liṅgasvāmin temple was built in the eighteenth century.[2] The oldest maps and plans, drawn by Colin Mackenzie and dated 1816, label the stūpa simply as the deepaladimma or 'hill of lights'.[3] The monument was not called a stūpa in ancient inscriptions, but rather the mahācetiya or great sanctuary.[4]

The Stupa, or mahāchetiya, was probably founded in the third century BCE in the time of Asoka but there is no decisive evidence for the foundation.[5] The earliest inscription from the site belongs to the early centuries BCE but it cannot be assigned to Aśoka with certainty.[6]

The main construction phases of Amaravati fall in two main periods, with the additions consisting of railings (vedikā) and carved slabs placed around the stūpa proper. These slabs are usually called 'drum slabs' because they were placed round the base of the stūpa which has a shape similar to a circular drum.[7] In the early period (circa 200-100 BCE), the stūpa had a simple railing consisting of granite pillars, with plain cross-bars, and coping stones. The coping stones with youths and animal reliefs, the early drum slabs, and some other early fragments belong to this period. The stūpa must have been fairly large at this time, considering the size of the granite pillars (some of which are still seen in situ, following excavations).

The late period of construction started around ca. 50 BCE and continued until circa 250 CE. This period is divided into three phases by Akira Shimada on the basis of the dates that can be assigned to parts of the great limestone railing.[7] The first phase is 50-1 CE, and the same period as the Sanchi stūpa I gateways. The second phase is 50-100 CE, the same period as Karli caitya and the Pandavleni Caves (no. 3 and 10) at Nasik. The third phase is circa 200-250 CE based on comparisons with Nagarjunakonda sculpture. Some other types of sculpture of belong to an even later time, about the seventh or eighth centuries, and include standing Bodhisattvas and goddesses. Amaravātī continued to be active after this time, probably to about the thirteenth century. It was built under Satavahana dynasty. 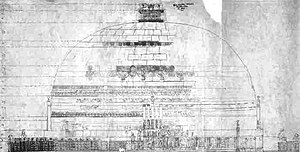 Reconstruction of the Amaravati Stupa by Walter Elliott, 1845.[8]

Plan of the Amaravati Stupa as sketched by Colin Mackenzie in 1816.[8]

Westerners were first alerted to the ruins of the Stupa at Amaravati after a visit in 1797 by Major Colin Mackenzie.[9] On the right bank of the Krishna River[10] in the Andhra district of southeast India, Mackenzie came across a huge Buddhist construction built of bricks and faced with slabs of limestone.[11] By the time he returned in 1816, indiscriminate excavations had already destroyed what remained of the structure and many of the bricks had been reused to build local houses.[9] Mackenzie carried out further excavations, recorded what he saw and drew a plan of the stupa.[12]

In 1845, Sir Walter Elliot of the Madras Civil Service explored the area around the stupa and excavated near the west gate of the railing, removing many sculptures to Madras (now Chennai). They were kept outside the local college before being transported to the Madras Museum. At this time India was run by the East India Company and it was to that company that the curator of the museum appealed. The curator Dr Edward Balfour was concerned that the artefacts were deteriorating so in 1853 he started to raise a case for them to be moved.

By 1855, he had arranged for both photographs and drawings to be made of the artifacts, now called the Elliot Marbles. 75 photographs taken by Captain Linnaeus Tripe are now in the British Library. The sculptures were exported to London in 1859.[13] Robert Sewell made further excavations in the 1880s, recording his excavations in some detail with drawings and sketches but not in the detail that would now be expected.[9]

Plans have also been put in place to create a purpose built exhibition space for the sculptures still in India. Those marbles not in an air-conditioned store were said to show signs of damage from the atmosphere and salt.[13] The Chennai museum has plans for an air-conditioned gallery to install the sculptures, but these goals have yet to be realised.[14]

The region between the Krishna and Godavari rivers was an important place for Buddhism from the 2nd century BCE onwards. A Buddhist stupa was built during the reign of Ashoka in 200 BCE, carved with panels that tell the story of Buddha Shakyamuni. The story of the sculptures, including their discovery, misuse and destruction and subsequent preservation and distribution to various museums (Chennai, Calcutta, London, Masulipatnam etc.) has been poignantly described by Shimada.[15] During the period of the decline of Buddhism, this stupa was neglected and was buried under rubble. A 14th-century inscription in Sri Lanka mentions repairs made to the stupa, and after that it was forgotten. The stupa is related to the Vajrayana teachings of Kalachakra, still practiced today in Tibetan Buddhism.[16] The Dalai Lama of Tibet conducted a Kalachakra initiation at this location in 2006.

Distribution of the Edicts of Ashoka[17]

Art historians regard the art of Amaravati as one of the three major styles or schools of ancient Indian art, the other two being the Mathura style, and the Gandharan style. The Amaravati school of art had great influence on art in Sri Lanka and South-East Asia. It also had influence over South Indian sculpture.

The Chinese traveller and Buddhist monk Hiuen Tsang (Xuanzang) visited Amaravati in 640 CE, stayed for sometime and studied 'Abhidhammapitakam'. Xuanzang wrote a glorious account of the place, Viharas and monasteries that existed.[18]

A different type of art form evolved and flourished in Amaravati for nearly six centuries, commencing from 200-100 BCE. Patronized first by the Satavahanas and later by the Ikshvakus and other groups (feudatories, officials, and merchants), four periods of activity are easily discernible.[19]

The Amaravati school of art occupies a pre-eminent position in the history of Indian Art. With its beginning in 3rd century BCE, the Amaravati unfolds its chapters through the galaxy of sculptural wealth that once adorned the Mahachaitya - the majestic monument of the Buddhists situated here with its history extending over a period of a millennium and a half.[20]

This album of drawings of Amarāvati is a landmark in the history of archaeology in India. The pictures were made in 1816 and 1817 by a team of military surveyors and draftsmen under the direction of Colonel Colin Mackenzie (1757-1821), the first Surveyor-General of India.[21]

The album contains maps, plans and drawings of sculpture from the stūpa at Amarāvati. The album is preserved in the British Library, where it is online,[22] with a second copy in Kolkata.

All of the sculptures have been removed from the site of the Mahācetiya, although a few broken pillars remain. Apart from the museum at the site, several museums across India and around the world have specimens from Amarāvati. These collections are being brought together in the World Corpus of Amarāvatī Sculpture, a digital project agreed to and jointly developed by the Archaeological Survey of India and the British Academy, London.[23] The largest collections are the group in the Government Museum, Chennai, and the group in the British Museum in London. Significant collections of sculpture are held in the following places:[24]