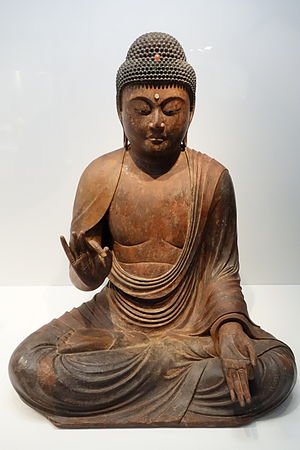 According to the Longer Sukhāvatīvyūha Sūtra, many eons ago, a monk named Dharmakara vowed before Avalokiteshvara to follow the bodhisattva path to buddhahood.[1] As part of his vows, Dharmakara resolved to establish the pure buddha field of Sukhavati, and further vowed that anyone who recited his mantra as least ten times would be reborn in his buddha field.

In the Vajrayana, Amitābha is also identified as one of the five tathagatas.

Amitābha is sometimes referred as Amitāyus, the "Buddha of Limitless Light." In the Longer Sukhavati Sutra, for example, Amitābha and Amitāyus are both used as epithets for the same buddha.[1] However, in some instances within Tibetan Buddhism, the name Amitāyus is used to refer to a distinct form of Amitābha.[1]