From Encyclopedia of Buddhism
Jump to: navigation, search
This article is about the term anagārika in general. For the Sri Lankan Buddhist revivalist and writer, see Anagarika Dharmapala. 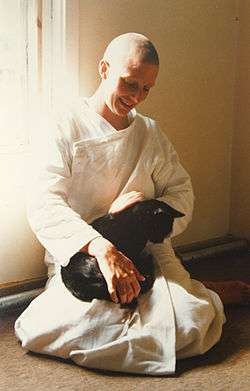 In Buddhism, an anagārika (Pali, "homeless one", [əˈnəɡɑːrɪkə]; f. anagārikā [əˈnəɡɑːrɪkɑː]) is a person who has given up most or all of his worldly possessions and responsibilities to commit full-time to Buddhist practice. It is a midway status between a bhikkhu or bhikkhuni (fully ordained monastics) and laypersons. An anagārika takes the Eight Precepts, and might remain in this state for life.

Anagārikas usually wear white clothes or robes, depending on the tradition they follow. Some traditions have special ordination ceremonies for anagārikas, while others simply take the eight precepts with a special intention.

Given the lack of full ordination for women in modern Theravada Buddhism, women who wish to renounce live as anagārikās under names such as maechi in Thailand, thilashin in Myanmar, and dasa sil mata in Sri Lanka. They make take the Eight or Ten Precepts. In Vajrayana Buddhism, many nuns are technically anagārikās or śrāmaṇerikās (novitiates).

In monastic settings, lay attendants for monks or nuns are needed. The monastic rules restrict monks and nuns from many tasks that might be needed, including the use of money, driving, cooking, digging and cutting plants, so lay attendants help bridge this gap. Anagārikas differ from laity by their commitment to Buddhism, to their precepts, and to monastics. There is usually a notable difference in their manner, appearance and attire. In many cases, they are full-time residents at the vihara where they ordained. Anagārikas often have the intention of becoming a monk or nun at a later point, though not always. In some monasteries a period as an anagārika, often one year, is required in order to take novice ordination.