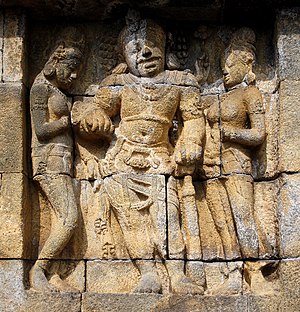 Asura (T. lha min ལྷ་མིན་ or ལྷ་མ་ཡིན་; C. axiuluo) are one of the six classes of beings within samsara. This term is commonly translated as "demi-gods."

The asuras, or demi-gods, have pleasure and abundance almost as much as the gods, but they spend their time fighting among themselves or making war on the gods (deva). When they make war on the gods, they always lose, since the gods are much more powerful. The asuras suffer from constant fighting and jealousy, and from being killed and wounded in their wars with each other and with the gods.