The Avataṃsaka Sūtra (Sanskrit; alternatively, the Mahāvaipulya Buddhāvataṃsaka Sūtra) is one of the most influential Mahayana sutras. The title is rendered in English as Flower Garland Sutra, Flower Adornment Sutra, or Flower Ornament Scripture.

The Avataṃsaka Sūtra is highly influential in both East Asian Buddhism and Tibetan Buddhism.

Within East Asian Buddhism, the vision expressed in this work was the foundation for the creation of the Huayan school. This sutra is also influential in Chan Buddhism.[1]

Within Tibetan Buddhism, sections within the sutra such as Sutra of the Ten Bhumis and the Gandavyuha Sutra are very influential.

"As to the Avatamsaka-Sutra, it is really the consummation of Buddhist thought, Buddhist sentiment, and Buddhist experience. To my mind, no religious literature in the world can ever approach the grandeur of conception, the depth of feeling, and the gigantic scale of composition, as attained by the sutra. Here not only deeply speculative minds find satisfaction, but humble spirits and heavily oppressed hearts, too, will have their burdens lightened. Abstract truths are so concretely, so symbolically represented here that one will finally come to a realization of the truth that even in a particle of dust the whole universe is seen reflected-not this visible universe only, but a vast system of universes, conceivable by the highest minds only."

The starting point for Huayan Buddhism is the extravagant, lengthy Flower Ornament Sutra, or Avatamsaka Sutra in Sanskrit, considered the most elevated scripture by the Huayan school. (Avatamsaka is translated as Huayan in Chinese, which is read as Kegon in Japanese.) The Chinese Huayan school features intricate, didactic philosophical speculations, illustrated with fascinating metaphors inspired by the sutra. Yet the Flower Ornament Sutra itself is a very different type of literature. It consists of highly sumptuous visions that offer a systematic presentation of the stages of development and unfolding of the practice activities of bodhisattvas. This sutra is sometimes described as Shakyamuni Buddha’s very first awareness upon his great enlightenment, which was too lofty for anyone else at that time to hear. Over 1,600 pages in Thomas Cleary’s translation, the Flower Ornament Sutra is a samadhi text, designed to inspire luminous visions and exalted experiences of mind and reality through its use of lush, psychedelic, evocative imagery.

The translator Thomas Cleary referred to this text as "the most grandiose, the most comprehensive, and the most beautifully arrayed of the Buddhist scriptures."[4]

This text is known by the following titles:

According to a Dunhuang manuscript, this text was also known as the Bodhisattvapiṭaka Buddhāvataṃsaka Sūtra.[8] 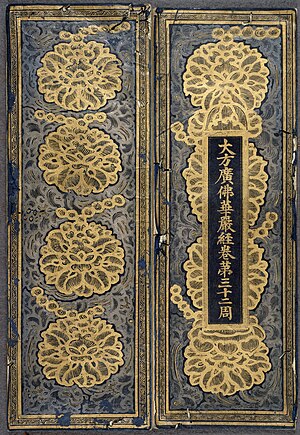 According to modern scholars, Avataṃsaka Sūtra was written in stages, beginning from at least 500 years after the death of the Buddha. One source claims that it is "a very long text composed of a number of originally independent scriptures of diverse provenance, all of which were combined, probably in Central Asia, in the late third or the fourth century CE."[10] Japanese scholars such as Akira Hirakawa and Otake Susumu meanwhile argue that the Sanskrit original was compiled in India from sutras already in circulation which also bore the name "Buddhavatamsaka".[11]

Two full Chinese translations of the Avataṃsaka Sūtra were made. Fragmentary translation probably began in the 2nd century CE, and the famous Ten Stages Sutra, often treated as an individual scripture, was first translated in the 3rd century. The first complete Chinese version was completed by Buddhabhadra around 420 in 60 scrolls with 34 chapters,[12] and the second by Śikṣānanda around 699 in 80 scrolls with 40 chapters.[13][14] There is also a translation of the Gaṇḍavyūha section by Prajñā around 798. The second translation includes more sutras than the first, and the Tibetan translation, which is still later, includes many differences with the 80 scrolls version. Scholars conclude that sutras were being added to the collection.

The single extant Tibetan version was translated from the original Sanskrit by Jinamitra et al. at the end of ninth century.[15] 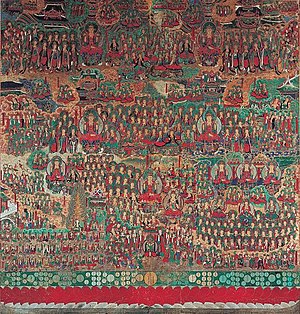 Illustration of the Avatamsaka Sutra at Songgwangsa in Suncheon, Korea.

The sutra, among the longest Buddhist sutras, is a compilation of disparate texts on various topics such as the Bodhisattva path, the interpenetration of phenomena (dharmas), the visionary powers of meditation and the equality of things in emptiness.[16] According to Paul Demiéville, the collection is "characterized by overflowing visionary images, which multiply everything to infinity, by a type of monadology that teaches the interpenetration of the one whole and the particularized many, of spirit and matter" and by "the notion of a gradual progress towards liberation through successive stages and an obsessive preference for images of light and radiance."[17] Likewise, Alan Fox has described the sutra's worldview as "fractal", "holographic" and "psychedelic".[18]

The East Asian view of the text is that it expresses the universe as seen by a Buddha (the Dharmadhatu), who sees all phenomena as empty and thus infinitely interpenetrating, from the point of view of enlightenment.[19] This interpenetration is described in the Avatamsaka as the perception "that the fields full of assemblies, the beings and aeons which are as many as all the dust particles, are all present in every particle of dust."[20] Thus, a Buddhas view of reality is also said to be "inconceivable; no sentient being can fathom it".[21] Paul Williams notes that the sutra speaks of both Yogacara and Madhyamaka doctrines, stating that all things are empty of inherent existence and also of a "pure untainted awareness or consciousness (amalacitta) as the ground of all phenomena".[22] The Avatamsaka sutra also highlights the visionary and mystical power of attaining the spiritual wisdom which sees the nature of the world:

Endless action arises from the mind; from action arises the multifarious world. Having understood that the world's true nature is mind, you display bodies of your own in harmony with the world. Having realized that this world is like a dream, and that all Buddhas are like mere reflections, that all principles [dharma] are like an echo, you move unimpeded in the world (Trans in Gomez, 1967: lxxxi)[23]

As a result of their meditative power, Buddhas have the magical ability to create and manifest infinite forms, and they do this in many skillful ways out of great compassion for all beings.[24]

In all atoms of all lands
Buddha enters, each and every one,
Producing miracle displays for sentient beings:
Such is the way of Vairocana....
The techniques of the Buddhas are inconceivable,
All appearing in accord with beings’ minds....
In each atom the Buddhas of all times
Appear, according to inclinations;
While their essential nature neither comes nor goes,
By their vow power they pervade the worlds.(Cleary 1984–7: I, Bk 4)

The point of these teachings is to lead all beings through the ten bodhisattva levels to the goal of Buddhahood (which is done for sake of all other beings). These stages of spiritual attainment are also widely discussed in various parts of the sutra (book 15, book 26). The sutra also includes numerous Buddhas and their Buddhalands which are said to be infinite, representing a vast cosmic view of reality, though it centers on a most important figure, the Buddha Vairocana (great radiance). Vairocana is a cosmic being who is the source of light and enlightenment of the 'Lotus universe', who is said to contain all world systems.[25] According to Paul Williams, the Buddha "is said or implied at various places in this vast and heterogeneous sutra to be the universe itself, to be the same as ‘absence of intrinsic existence’ or emptiness, and to be the Buddha’s all-pervading omniscient awareness."[26] The very body of Vairocana is also seen as a reflection of the whole universe:

The body of [Vairocana] Buddha is inconceivable. In his body are all sorts of lands of sentient beings. Even in a single pore are countless vast oceans.[27]

Also, for the Avatamsaka, the historical Buddha Sakyamuni is simply a magical emanation of the cosmic Buddha Vairocana.[28]

Luis Gomez notes that there is an underlying order to the collection. The discourses in the sutra version with 39 chapters are delivered to eight different audiences or "assemblies" in seven locations such as Bodh Gaya and the Tusita Heaven. Following the Chinese tradition, Gomez states that the major themes in each "assembly" are:[29]

Two of the chapters also circulated as independent sutras in China and India (The Gandavyuha and the Ten Stages Sutra). These two are the only sections of the Avatamsaka which survive in Sanskrit.[30]

The sutra is also well known for its detailed description of the course of the bodhisattva's practice through ten stages where the Ten Stages Sutra, or Daśabhūmika Sūtra (十地經, Wylie: phags pa sa bcu pa'i mdo), is the name given to this chapter of the Avataṃsaka Sūtra. This sutra gives details on the ten stages (bhūmis) of development a bodhisattva must undergo to attain supreme enlightenment. The ten stages are also depicted in the Laṅkāvatāra Sūtra and the Śūraṅgama Sūtra. The sutra also touches on the subject of the development of the "aspiration for Enlightenment" (bodhicitta) to attain supreme buddhahood. 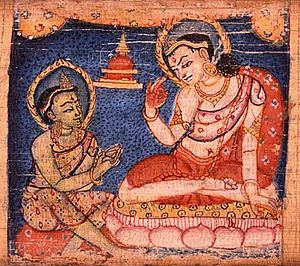 The last chapter of the Avatamsaka circulates as a separate and important text known as the Gaṇḍavyūha Sutra (lit. 'flower-array' or 'bouquet';[31] 入法界品 ‘Entering the Dharma Realm’[32]). Considered the "climax" of the larger text,[33] this section details the pilgrimage of the layman Sudhana to various lands (worldly and supra-mundane) at the behest of the bodhisattva Mañjuśrī to find a spiritual friend who will instruct him in the ways of a bodhisattva. According to Luis Gomez, this sutra can also be "regarded as emblematic of the whole collection."[34]

Despite its being at the end of the Avataṃsaka, the Gaṇḍavyūha—and the Ten Stages—is generally believed to be the oldest component written.[35]

The Tibetan version of this text was translated in the 9th century by Surendra and Vairocana Rakṣita. This translation consists of 45 chapters. It comprises four volumes in the Tibetan Kangyur (Derge edition).[38]