From Encyclopedia of Buddhism
Jump to navigation Jump to search
Not to be confused with Ayu Khandro.

Ayya Khema (August 25, 1923[1] – November 2, 1997) was a Buddhist teacher and was very active in providing opportunities for women to practice Buddhism,[2] founding several centers around the world. In 1987 she coordinated the first ever Sakyadhita International Association of Buddhist Women. Over two dozen books of her transcribed dhamma talks in English and German have been published, and in the last year of her life she also wrote her autobiography: I Give You My Life.

Born as Ilse Kussel in Berlin, Germany in 1923 to Jewish parents.[1] In 1938, her parents escaped from Germany and traveled to China while plans were made for Khema to join two hundred other children emigrating to Glasgow, Scotland.[3] After two years in Scotland, Khema joined her parents in Shanghai.[4] With the outbreak of the war, Japan conquered Shanghai and the family was moved into the Shanghai Ghetto in Hongkew where her father died five days before the war ended.[5]

At age twenty-two, Khema married a man seventeen years her senior named Johannes and they moved to an apartment in the Hongkou District.[6] In 1947, her first child, a daughter named Irene, was born.[7] As the People's Liberation Army were on the cusp of taking Shanghai, Khema and her family fled for San Francisco, California, United States.[8] From San Francisco, Khema moved to Los Angeles and then San Diego where she gave birth to her second child, a son named Jeffrey.[9]

Soon, Khema began feeling incomplete and this led to investigating various spiritual paths,[10] an interest her husband didn't share.[11] This led to their divorce.[12] Khema moved with her infant son to Rancho La Puerta in Tecate, Mexico to study the philosophy of the Essenes with Professor Edmund Skekely.[13] There she married her second husband, Gerd.[14] The whole family soon became vegetarian, a practice Khema continued until her death.[15]

To further her studies, Khema traveled to San Francisco to study Zen at the San Francisco Zen Center[16] and worked at Tassajara Zen Mountain Center for three months.[17] She then spent three weeks in Burma where she studied meditation with students of U Ba Khin.[18]

Khema's desire to become a Buddhist nun led her to Thailand where she studied with Tan Ajahn Singtong for three months.[19] Sri Lanka was her next destination where she met Nyanaponika Thera who introduced her to Narada Maha Thera.[20] Naranda Thera gave her the name "Ayya Khema".[21]

A 1983 return trip to Sri Lanka, led her to meet her teacher, Ven. Matara Sri Ñānarāma of Nissarana Vanaya, who inspired her to teach jhana meditation.[22] As it was not possible at the time to organize an ordination ceremony for bhikkhunis in the Theravada tradition, Ayya Khema then received complete monastic ordination at the newly built Hsi Lai Temple, a Chinese Mahayana temple under the Fo Guang Shan Buddhist Order, in 1988.[23][2] 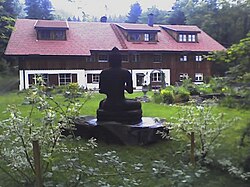 In 1989, Khema returned to Germany and began teaching at Buddha Haus in Munich.[26]

According to Ayya Khema's own admission, she had been suffering from breast cancer since 1983. In 1993 after it started giving her trouble she underwent a mastectomy operation in Germany. During a five-week recovery period in the hospital she almost died, but her condition was expeditiously stabilized by the medics. In an interview she expressed a positive opinion of that experience.[27]

Ayya Khema died on November 2, 1997 at Buddha Haus, Uttenbühl (part of the village Oy-Mittelberg) in Germany after fourteen years with breast cancer.[28] Her ashes are kept in a stupa at Buddha Haus.[26]