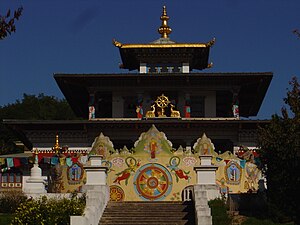 Temple of One Thousand Buddhas, in la Boulaye, Saône-et-Loire, Burgundy

Bhadrakalpikasūtra (T. བསྐལ་པ་བཟང་པོའི་མདོ་, bskal pa bzang po’i mdo C. Xianjie jing) or Fortunate Aeon Sutra, is a Mahayana sutra of the Sanskrit tradition in which the Buddha teaches a special meditation practice for bodhisattvas and provides detailed descriptions of the 1002 buddhas of this Fortunate Aeon.[1][2]

According to Buswell, the text was written in c. 200-250 CE, and translated into Chinese by Dharmaraksa about fifty years later.[1] The text was also translated into Tibetan; it is included in the Tibetan Kangyur. The original Sanskrit text is now lost.

This sutra was taught by Buddha Shakyamuni in Vaishali at the request of Bodhisattva Pramuditarāja.

While resting in a park outside the city of Vaiśālī, the Buddha is approached by the bodhisattva Prāmodyarāja, who requests meditation instruction. The Buddha proceeds to give a teaching on a meditative absorption called elucidating the way of all phenomena and subsequently delivers an elaborate discourse on the six perfections. Prāmodyarāja then learns that all the future buddhas of the Good Eon are now present in the Blessed One’s audience of bodhisattvas. Responding to Prāmodyarāja’s request to reveal the names under which these present bodhisattvas will be known as buddhas in the future, the Buddha specifies these names and goes on to describe the circumstances surrounding their birth, awakening, and teaching in the world. In the sūtra’s final section, we learn how each of these great bodhisattvas who are on the path to buddhahood first developed the mind of awakening.[3]

The text was translated into Chinese by Dharmaraksa in about 290.[1][2]