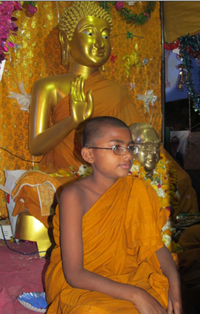 The Pali word "bhante" is a gender neutral term, unlike "bhikkhu" or "bhikkhuni". It is equivalent to Sanskrit verb 'Vande' or 'Bande' as in the song Vande Mataram. Vande means a reverential action of 'bowing' to someone or something. The Nepali terms for the Hindu priestly caste, bare and bande, have the same derivation.[3] The Pali term Bhante can also be used as an honorific or a form of address to specific Buddhist monks, similar to Ajahn, Phra or Luang Por in Thailand or Ashin in Burma.

Grammatically "bhante" is a vocative case form of a Pali word "bhadanta" (venerable, reverend).[4] The vocative case denotes and is used for address.[5]