From Encyclopedia of Buddhism
(Redirected from Bhikkhu Sujato)
Jump to: navigation, search 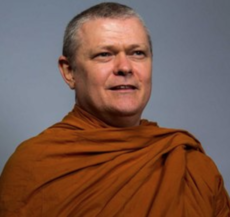 Bhante Sujato, aka Ajahn Sujato or Bhikkhu Sujato, is an Australian Buddhist teacher and monk in the Theravada tradition. His main influences are the Thai forest tradition, the study of the early Buddhist sutras, and the practice of loving kindness at transmitted by his teacher Ajahn Maha Chatchai.

Bhante Sujato was born on November 4, 1966 in Perth, Australia, with the given name of Anthony Best.

In his studies of the early sutras he was struck by the parallel texts preserved in the Sansrkit, Chinese, and Tibetan texts, which he has presented as evidence that much of the original teachings of the Buddha were accurately preserved in these sutras.

He is also an advocate for the revival of Bhikkhuni ordination in the Theravada tradition.[3]

Bhante Sujato was raised in a liberal Catholic family. But as a teenager, inspired by the scientific vision of the world, and especially the theory of relativity, he rejected Christianity. He studied literature and philosophy at the University of Western Australia. After two years he give up his studies and co-founded the indie-rock band Martha's Vineyard. The band had some success in the late 1980s.

In 1992, Bhante Sujato travelled to Thailand, and although he had no previous association with Buddhist practice, he joined an intensive Buddhist meditation retreat in the Chieng Mai Buddhist temple. After a year he went to Wat Pa Nanachat, the International Forest Monastery run by and for English-speaking monks, in the tradition of Ajahn Chah. He was ordained a novice, and in the following year (May 5, 1994) he was ordained as bhikkhu.

In 2003, Bhante Sujato established Santi Forest Monastery in New South Wales and served as Abbot from 2003-2012.

His research concerns the earliest Buddhist scriptures. Thanks to comparative and historical analysis, Sujato tries to highlight the process of emerging Buddhist ideology and identity.

Research paper on authenticity of the Pāli Canon

In a research paper, Bhikkhu Sujato and Bhikkhu Brahmali argue that it is likely that much of the Pali Canon dates back to the time period of the Buddha. They base this on many lines of evidence, including the technology described in the canon (apart from the obviously later texts), which matches the technology of his day which was in rapid development, that it doesn't include back written prophecies of the great Buddhist ruler King Ashoka (which Mahayana texts often do) suggesting that it predates his time, that in its descriptions of the political geography it presents India at the time of Buddha, which changed soon after his death, that it has no mention of places in South India, which would have been well known to Indians not long after Buddha's death and various other lines of evidence dating the material back to his time.[6]

Advocate for the ordination of nuns (bhikkhuni)

A special field of Sujato's interest is the role of women in Buddhism, and in particular the renewal of the bhikkhuni rule within the Theravada tradition. Bhante Sujato tries to influence this urgent matter regarding the modern world of Theravada Buddhism. In this connection, he attempted to establish a community of nuns (bhikkhuni) at Santi Monastery.

Although he supports the ordination of Bhikkhunis by importing it from the Asian Mahayana traditions, he also has made the suggestion that there is sutra support within the Therevadhan traditions for Bhikkhus to carry out the ordination of nuns even when the tradition has been broken.

This is the passage he then quotes:

He goes on to discuss this suggestion in detail. [7]

A list of Bhante Sujato's books are available here: