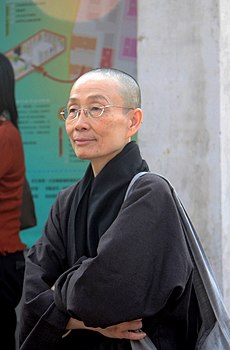 A Taiwanese bhikṣuṇī, a member of the Dharmaguptaka ordination lineage. 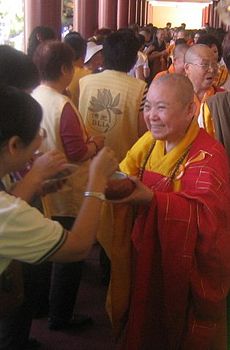 A high-ranking bhikṣuṇī in the Chinese Buddhist tradition during an alms round.

A bhikkhunī (Pali) or bhikṣuṇī (Sanskrit) is a fully ordained female monastic in Buddhism. Male monastics are called bhikkhus. Both bhikkhunis and bhikkhus live by the Vinaya, a set of rules. Until recently, the lineages of female monastics only remained in Mahayana Buddhism and thus are prevalent in countries such as Korea, Vietnam, China, and Taiwan but a few women have taken the full monastic vows in the Theravada and Vajrayana schools over the last decade.

In Buddhism, women are as capable of reaching nirvana as men. According to Buddhist scriptures, the order of bhikkhunis was first created by the Buddha at the specific request of his aunt and foster-mother Mahapajapati Gotami, who became the first ordained bhikkhuni. A famous work of the early Buddhist schools is the Therigatha, a collection of poems by elder nuns about enlightenment that was preserved in the Pāli Canon.

Bhikkhunis are required to take extra vows, the Eight Garudhammas, and are subordinate to and reliant upon the bhikkhu order. In places where the bhikkhuni lineage was historically missing or has died out, due to hardship, alternative forms of renunciation have developed. In Tibetan Buddhism, women officially take the vows of śrāmaṇerīs (novitiates); Theravadin women may choose to take an informal and limited set of vows similar to the historical vows of the sāmaṇerī, like the maechi of Thailand and thilashin of Myanmar.

The tradition of the ordained monastic community (sangha) began with the Buddha, who established an order of Bhikkhus (monks).[1] According to the scriptures,[2] later, after an initial reluctance, he also established an order of Bhikkhunis (nuns or women monks). However, according to the scriptural account, not only did the Buddha lay down more rules of discipline for the bhikkhunis (311 compared to the bhikkhu's 227 in the Theravada version), he also made it more difficult for them to be ordained, and made them subordinate to monks. The bhikkhuni order was established five years after the bhikkhu order of monks at the request of a group of women whose spokesperson was Mahapajapati Gotami, the aunt who raised Gautama Buddha after his mother died.

The historicity of this account has been questioned,[3] sometimes to the extent of regarding nuns as a later invention.[4] The stories, sayings and deeds of a substantial number of the preeminent Bhikkhuni disciples of the Buddha as well as numerous distinguished bhikkhunis of early Buddhism are recorded in many places in the Pali Canon, most notably in the Therigatha and Theri Apadana as well as the Anguttara Nikaya and Bhikkhuni Samyutta. Additionally the ancient bhikkhunis feature in the Sanskrit Avadana texts and the first Sri Lankan Buddhist historical chronicle, the Dipavamsa, itself speculated to be authored by the Sri Lankan Bhikkhuni Sangha.

According to Peter Harvey, "The Buddha's apparent hesitation on this matter is reminiscent of his hesitation on whether to teach at all", something he only does after persuasion from various devas.[5] Since the special rules for female monastics were given by the founder of Buddhism they have been upheld to this day. Buddhists nowadays are still concerned with that fact, as shows at an International Congress on Buddhist Women's Role in the Sangha held at the University of Hamburg, Germany, in 2007.

In Buddhism, women can openly aspire to and practice for the highest level of spiritual attainment. Buddhism is unique among Indian religions in that the Buddha as founder of a spiritual tradition explicitly states in canonical literature that a woman is as capable of nirvana as men and can fully attain all four stages of enlightenment.[6][7] There is no equivalent in other traditions to the accounts found in the Therigatha or the Apadanas that speak of high levels of spiritual attainment by women.[8]

Female monastics are required to follow special rules that male monastics do not, the Eight Garudhammas. The origin of the Eight Garudhammas, the special vows taken by female monastics, is unclear. The Buddha is quoted by Thannisaro Bhikkhu as saying, "Ananda, if Mahaprajapati Gotami accepts eight vows of respect, that will be her full ordination (upasampada)."[10] Modern scholars[who?] have shown that this story abounds in textual problems, and cannot possibly be a factual account.[11] According to the scriptural accounts, the reason the Buddha gave for his actions was that admission of women to the sangha would weaken it and shorten its lifetime to 500 years. This prophecy occurs only once in the Canon and is the only prophecy involving time in the Canon.[12]

In Young Chung noticed that society as recorded in the Vinaya always criticized the bhikkhunis more harshly using "shaven headed strumpets or whores", whereas the bhikkhus were simply called "shaven headed". This harsher treatment (which also included rape and assault) of bhikkhunis by society required greater protection. Within these social conditions, Gautama Buddha opened up new horizons for women by founding the bhikkhuni sangha. This social and spiritual advancement for women was ahead of the times and, therefore, drew many objections from men, including bhikkhus. He was probably well aware of the controversy that would be caused by the harassment of his female disciples."[13]

The Vinaya does not allow for any power-based relationship between the monks and nuns. Dhammananda Bhikkhuni wrote:

Nuns at the time of the Buddha had equal rights and an equal share in everything. In one case, eight robes were offered to both sanghas at a place where there was only one nun and four monks. The Buddha divided the robes in half, giving four to the nun and four to the monks, because the robes were for both sanghas and had to be divided equally however many were in each group. Because the nuns tended to receive fewer invitations to lay-people's homes, the Buddha had all offerings brought to the monastery and equally divided between the two sanghas. He protected the nuns and was fair to both parties. They are subordinate in the sense of being younger sisters and elder brothers, not in the sense of being masters and slaves."[14]

Ian Astley argues that under the conditions of society where there is such great discrimination and threat to women, Buddha could not be blamed for the steps he took in trying to secure the Sangha from negative public opinion:

In those days (and this still applies to much of present Indian society) a woman who had left the life of the household would otherwise have been regarded more or less as a harlot and subjected to the appropriate harassment. By being formally associated with the monks, the nuns were able to enjoy the benefits of leaving the household life without incurring immediate harm. Whilst it is one thing to abhor, as any civilized person must do, the attitudes and behavior towards women which underlie the necessity for such protection, it is surely misplaced to criticize the Buddha and his community for adopting this particular policy.[13]

Getsul and Getsulma (Tib <dge tshul>) (Skt <sramanera>) is the novice ordination, a preparation monastic level prior to Gelongma. Novices, both male and female, adhere to twenty-five main vows. A lay person or child monk too young to take the full vows may take the five vows called "approaching virtue" (in Tibetan genyen <dge snyan>). These five vows can be practiced as a monastic, where the genyen maintains celibacy, or as a lay practitioner, where the married genyen maintains fidelity.

Starting with the novice ordination (Tib. ge tsul) some may choose to take forty years to gradually arrive at the bhikkshu (Tib. gelong) vows of a fully ordained monk.[15][16] Others take the getsulma and gelongma vows on the same day and practice as a gelongma from the beginning, as the getsulma vows are included within the gelongma.