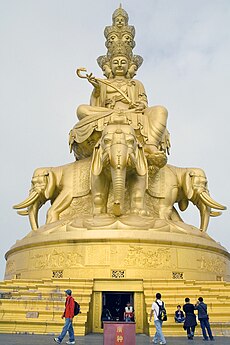 Statue of the bodhisattva Samantabhadra at Mount Emei

Bodhimaṇḍa (Sanskrit and Pali; traditional Chinese: 道場; ; pinyin: dàochǎng) is a term used in Buddhism meaning the "position of awakening." According to Haribhadra, it is "a place used as a seat, where the essence of enlightenment is present."[1] Although spelled similarly, a bodhimaṇḍa is not synonymous with a bodhimaṇḍala, which is a "circle of enlightenment."[2]

Bodhimaṇḍas are regularly visited by Buddhist pilgrims, and some have gone on to become popular secular tourist destinations as well. In many forms of Buddhism, it is believed that bodhimaṇḍas are spiritually pure places, or otherwise conducive to meditation and enlightenment.

Different Buddhist sects often disagree on the location and significance of different bodhimaṇḍas. As one would expect, the southern Theravada tradition tends to emphasize the bodhimaṇḍas of the Indian subcontinent, while most northern Mahayana schools tend to venerate sites in China, Japan, and Tibet.