The Bogd Khan (Mongolian: Богд хаан;[2] 1869–1924) was enthroned as Khagan of Mongolia (Bogd Khaganate) on 29 December 1911, when Outer Mongolia declared independence from the Qing dynasty after the Xinhai Revolution. He was born in Tibet. As the 8th Jebtsundamba Khutuktu, he was the third most important person in the Tibetan Buddhist hierarchy, below only the Dalai and Panchen Lamas, and therefore also known as the "Bogdo Lama". He was the spiritual leader of Outer Mongolia's Tibetan Buddhism. His wife Tsendiin Dondogdulam, the Ekh Dagina ("Dakini Mother"), was believed to be a manifestation of White Tara. 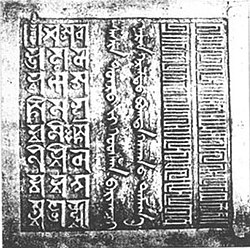 The future Bogd Khan was born in 1869 in Lithang, Kham, in a family of a Tibetan official.[3] His father, Gonchigtseren, was an accountant at the 12th Dalai Lama's court.[4] The boy was officially recognized as the new incarnation of the Bogd Gegen in Potala in the presence of the 13th Dalai Lama and the Panchen Lama.[5] The new Bogd Gegen arrived in Urga, the capital of Outer Mongolia, in 1874. After this he lived only in Mongolia.

According to one eyewitness,

...he did not become a puppet in the hands of the lamas but, on the contrary, took them in hand. Since his young years he wanted to restore the great Mongolian kingdom of Genghis Khan or, at least, to liberate Mongolia from the Chinese and make it self-dependent. Local princes feared him, but the masses liked him... An independent and clever first hierarch and ruler was unacceptable neither for Tibet, nor for the Chinese.[6]

As a result, from his young years the 8th Bogd Gegen was the subject of intrigues of Qing officials in Urga. Later he became the subject of propaganda campaigns organised by Mongolian Communists, which attacked him by alleging that he was a prolific poisoner, a paedophile, and a libertine, which was later repeated in belles-lettres and other non-scientific literature (e.g. James Palmer). However, analysis of documents stored in Mongolian and Russian archives does not confirm these statements.[7][8]

As a monk, the Bogd had limited access to physical means of imposing power, though some enemies were executed for blasphemy. The Polish traveller Ferdinand Ossendowski recorded that he knew "every thought, every movement of the Princes and Khans, the slightest conspiracy against him, and the offender is usually kindly invited to Urga, from where he does not return alive.[9] Ossendovsky's claims for his acquaintance with the Bogd Gegen were not confirmed by comparative analysis of his book and manuscripts.[10]

The Bogd Gegen lost his power when Chinese troops occupied the country in 1919. The Tusiyetu Khan Aimak's Prince Darchin Ch'in Wang was a supporter of Chinese rule while his younger brother Tsewang was a supporter of Ungern-Sternberg.[11] When Baron Ungern's forces failed to seize Urga in late 1920, the Bogd was placed under house arrest; then he was freed and reinstated by Ungern shortly before he took Urga in 1921.[12] After the revolution in 1921 led by Damdin Sükhbaatar, the Bogd Khan was allowed to stay on the throne in a limited monarchy until his death in 1924,[13][14] a year after that of his wife.

The government took control of the Bogda Khan's seal after his death according to the 26 November 1924 Constitution of the Mongolian People's Republic.[15]

It was proposed that Zhang Zuolin's domain (the Chinese "Three Eastern Provinces") take Outer Mongolia under its administration by the Bogda Khan and Bodo in 1922 after pro-Soviet Mongolian Communists seized control of Outer Mongolia.[11]

Nevertheless, the next reincarnation of Bogd Gegen was found in Tibet as a boy born in 1932 in Lhasa. This was not announced until the collapse of the USSR and democratic revolution in Mongolia. The 9th Jebtsundamba Khutughtu was formally enthroned in Dharamsala by Tenzin Gyatso, the 14th Dalai Lama in 1991, and in Ulaanbaatar in 1999.

The Winter Palace of the Bogd Khan has been preserved and is a tourist attraction in Ulaanbaatar.

Template:Heads of state of Mongolia