Borobudur reliefs of the Lalitavistara Sutra

The Borobodur reliefs (from the Borobudur temple in Indonesia) contain a series of panels depicting the life of the Buddha as described in the Lalitavistara Sutra.[1] In these reliefs, the story starts from the glorious descent of the Buddha from the Tushita heaven, and ends with his first sermon in the Deer Park near Benares.

The Bodhisattva in Tushita Heaven before his birth as Siddhartha Gautama. Borobudur

The Buddha lives among the clouds above Indra’s palace on the peak of Mount Sumeru. The future Buddha tells the gods he has decided to be reborn on earth. Around his waist there is wrapped a cord that supports his right knee. This is a convention used in Borobudur to denote people of high status. In honor of his upcoming birth, a few gods go to earth to teach Brahmans. The Buddha teaches the “Introduction of the Law” to the gods, and gives his crown to a bodhisattva named Maitreya, who is his successor-designate. The Buddha then asks the gods what form he should take in his mother’s womb. Some recommend the figure of a human, but others tell him that in the Brahmans’ books, the Buddha is described as an elephant with six tusks, brightly shining, with a red head oozing sap.

Queen Maya and King Suddodana live in a palace in the city of Kapilavastu. The king grants her request to undertake a vow of self-denial. Queen Maya is seated in her quarters awaiting the Buddha’s descent. During the “Great Descent”, the Buddha sits on a throne in a pavilion, accompanied by an uncountable number of gods, nymphs, and other supernatural beings. While Queen Maya sleeps, the Buddha enters her womb in the shape of the elephant. That night a lotus grows from the oceans to Brahma’s heaven. The lotus contains the essence of all creation. Brahma collects the essence in a bowl, and gives the Buddha the essence to drink as a mark of honor. This is one of the most popular scenes in ancient Buddhist art. Queen Maya decides to go to a forest of ashoka trees. She arrives and sends a servant to ask the king to meet her there. 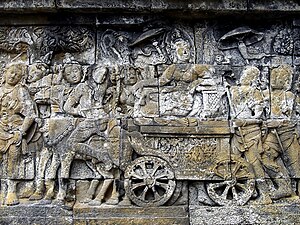 Queen Maya leaves to go to Lumbini to give birth. Borobudur

The king arrives at the edge of the forest but is not allowed to go any further. The queen tells him of her dream, in which an elephant enters her womb. She asks him to get brahmans to interpret the dream. The brahmans tell the couple that the queen will bear a son who will become either a universal ruler or a buddha. Indra and other gods offer for the queen to stay in their palace during her pregnancy. The unborn Buddha creates the illusion that the queen is in all palaces to prevent any of the gods or kings to be disappointed. During her pregnancy, the queen acquires certain powers, such as the ability to restore people possessed by supernatural beings to their normal state by letting them view her, and also the power to heal diseases. The king lives as a hermit during her pregnancy. Queen Maya asks the king to be allowed to give birth in the Lumbini Pleasure Garden. The queen sets out for the garden in a carriage. When she arrives, she walks until she comes to an ashoka tree which magically bends down for her. She grasps the limb, and the Buddha emerges from her right side. The baby takes seven steps in each of the four compass directions, and at each step a lotus springs up. After Sakyamuni’s birth, Indra and Brahma disguise themselves as brahmans to congratulate King Suddhodhana along with many other gods. A week after the Buddha is born, Queen Maya dies and becomes a goddess. Her sister, Gautami, becomes the baby prince’s guardian. Some members of the Sakya tribe suggest the child should be taken to the temple. When the prince arrives, the statues in the temple come to life and kneel before him.

Sakyamuni is sent to school when he is old enough. The schoolmaster is Visvamitra, and a god named Subhangga is also there. The story skips a few years and then describes a visit to a rural village. This is where the scene of the first meditation takes place. The prince sits down under a guava tree to meditate.

The king wishes Sakyamuni to marry because he remembers the prophecy that his son is to become a buddha or a great ruler. The prince tells him he will give his answer in seven days. The prince consents and chooses Gopa as his wife. Only she can bear to look at him without being blinded by his radiance. Gopa’s father is not certain the prince is suitable for his daughter, so he requires the prince undergo some tests to prove his mental and physical abilities.

Episode 3: Buddha’s Marriage and Renunciation of His Earlier Life (panels 46-75) 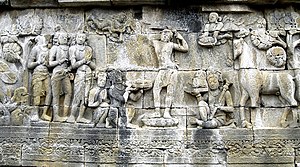 The prince Siddhartha Gautama cuts his hair and becomes and renunciant. Borobudur

Sakyamuni and 500 other princes go out to the city to demonstrate his powers. He sets a problem that only he can solve. The next test is an archery competition. Sakyamuni used an ancient bow which had been preserved in a temple since his grandfather’s time. He shot an arrow through seven trees, and through other various targets including an iron boar. Gopa’s father agrees to the marriage. Various gods including Indra and Brahma congratulate him on his marriage and ask when he will begin his quest for enlightenment.

The king dreams of the prince’s departure and tries to attract him to remain by building three more palaces to amuse him. The king posts guards around the prince’s palace and sends young women to entertain him. This is one of the most successful compositions on the monument.

One day the prince decides to go to a royal pleasure garden. Suddenly an old man appears to him, and the prince goes back to the palace. This is the first of the Four Encounters which motivate the prince to begin his quest for enlightenment. The second encounter the prince again sets out for the pleasure garden, but sees a sick man. Another occasion occurs where the prince sees a dead man surrounded by grieving relatives. The last encounter is again created by the gods, and involves a monk. He is at peace compared to the grief and suffering felt by the others. The prince meditates based on the example of the monk and on the path of salvation from suffering.

Sakyamuni comforts Gopa that night who had a bad dream, then the next day went to the king and asked permission to leave. After the prince says goodbye to gods and other supernatural beings, he cuts off his hair. Then he discards his royal robes and puts on orange robes of a passing hunter. The prince goes to two places where brahman female hermits offer him food. Sakyamuni embarks on a life as a wandering monk.

Eventually he reaches a kingdom called Vaisali where he asks permission to become a pupil of a brahman named Arada Kalapa. After some time Arada acknowledges the prince as his equal, and Sakyamuni also becomes a teacher. Later Sakyamuni decides to resume his travels, and comes to the city of Rajagrha to beg. The people are in awe of his appearance and think Brahma himself has come to beg. The next day a bright shining light comes from Mount Pandava where Sakyamuni is staying. The king asks him to stay and take half the kingdom. Sakyamuni later visits a teacher in Rajagrha named Rudraka and is invited to join him.

After a while the prince goes to Magadha. Five men from Rudraka’s group decide to follow him, and they meditate on Gayasirsa Mountain. Then the prince and his new disciples go to meditate beside the Nairanjana River. This is where Sakyamuni practices such harshness that he nearly starves himself. Because he is near death, Queen Maya comes to see him and begins to cry. The gods offer to provide him with magical strength so he will not have to eat, but he is scared the people will believe he can live without food. He abandoned his fast, and the five disappointed disciples leave him.

The prince then goes to a place called Uruvila. Sakyamuni decides to put on a new robe, and takes a shroud from a dead woman named Radha. He washes it on a stone by a pond. When Sakyamuni tries to leave the pond, the demon Mara makes the banks rise enormously high. The goddess of a tree beside the pond bends her branch and saves Sakyamuni. Another god gives the prince a reddish robe.

The village chief’s daughter, Sujata, invites the prince to her house and feeds him. Sakyamuni returns to the Nairanjana River to bathe, and takes a golden bowl which Sujata gave him. Gods come to him and attend him. The prince sits down and finishes the food Sujata gave him. When he is finished, Sakyamuni throws the bowl into the river. Indra desired it, and turned into a garuda to take it from the naga king who saved the bowl. The prince then sets out for the enlightenment tree.

Brahma and a group of gods go to pay homage to the prince. It is now time for Sakyamuni to seek a tree to meditate under. The demon Mara attacks the prince in a final effort of preventing him to seek enlightenment. Mara failed to defeat Sakyamuni by force, so he sends his beautiful daughters to try to arouse him, but this fails also.

Sakyamuni reaches Supreme Enlightenment, and becomes Buddha, the “Enlightened One.” Buddha remained in the same position for seven days, but arises to walk twice to far distances. Both times however, he returned to the sacred Bodhimanda.

Four weeks after enlightenment, Buddha goes to stay with a naga king named Mucilinda. The weather was poor so the naga king protects Buddha while he meditates. After five weeks, Buddha leaves Mucilinda’s palace to walk to a banyan tree. On the way he meets frugals who ask him how he has borne such a week of bad weather. Buddha goes to meditate under another tree, and merchants pass by who are frightened by the portents, but a goddess reassures them. The merchants offer Buddha food. He would like a bowl to put it in, and the four gods, “Great Kings,” each offer him bowls. Afraid to offend them he takes them all and combines them into one.

Gautama Buddha after his enlightenment, along with the five ascetics. Borobudur

That same night, the gods including Brahma and Indra, ask Buddha to preach the Law. By morning he agrees to preach, and asks to whom he should first preach the Law. He asks for Rudraka, but he has been dead for a week. Next he asks for Arada Kalapa, but he is also dead. Buddha then asks for the five disciples he had earlier, and he sees they are in the Deer Park at Benares. Buddha sets off for Benares, and on the way he meets a monk who asks where he is going. He goes through several cities, and is honored in each of them. Buddha comes to the River Ganges, and the ferryman refuses to row him across without payment. Buddha flies across the river, and the boatman faints.

Buddha arrives in Benares, and begs for food. He finds the five former disciples, and they are awed by his radiance and arise to serve him. The disciples ceremonially bathe Buddha. Then Buddha preaches his first sermon, which sets the “Wheel of the Law” in motion.[2]