From Encyclopedia of Buddhism
Jump to navigation Jump to search
For the Theravada text of the same name, see Brahmajala Sutta. 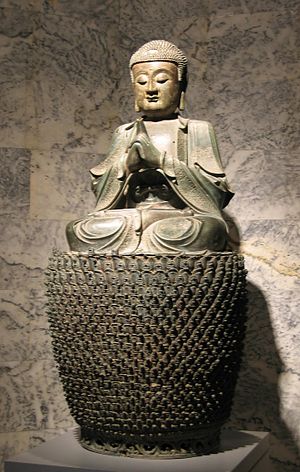 Vairochana as described in the Brahmajala Sutra

The Brahmajala Sutra (originally from ब्रह्मजाल सूत्र in Sanskrit, Chinese: 梵網經; pinyin: fàn wǎng jīng, Japanese: bonmōkyō), also called the Brahma's Net Sutra is a text of the Mahayana Buddhist canon.[1] It is related to the Indra's net metaphor.

It is not related to the Brahmajala Sutta of the Pali Canon.

The sutra is traditionally regarded as having been recorded in Sanskrit and then translated by Kumarajiva in 406, but scholars also speculate that it was written in East Asia by unknown authors in the mid-5th century CE.[1][2][3][4] The sutra itself claims that it is the final chapter of a much longer Sanskrit text, but such a text has never been found.[1]

This sutra introduces Vairocana Buddha and his relation to Shakyamuni Buddha and states the 10 major precepts for Bodhisattvas 十重戒 and the 48 minor precepts one should follow to advance along the path. These precepts came to be treated in China as a higher ethic a monk would adopt after ordination, in addition to the monastic rules. In Japan, they came to displace the monastic rules almost completely starting with Saicho and the rise of the Tendai sect.[5] So, when the Meiji period government allowed monks to marry, there weren't vinaya rules to forbid it, leading to most Japanese clergy now being married. The name of the sutra derives from the vast net that the Vedic god Brahma hangs in his palace,[6] and how each jewel in the net reflects the light of every other jewel:

At that time, he [Shakyamuni Buddha] contemplated the wonderful Jewel Net hung in Lord Brahma's palace and preached the Brahmajala Sutta for the Great Assembly. He said: "The innumerable worlds in the cosmos are like the eyes of the net. Each and every world is different, its variety infinite. So too are the Dharma Doors (methods of cultivation) taught by the Buddhas.

The sutra is also noteworthy for describing who Vairocana Buddha is, as the personification of the Dharma itself, or more specifically the Dharmakaya or Truth-Body of Buddhism:[6]

Now, I, Vairocana Buddha, am sitting atop a lotus pedestal; on a thousand flowers surrounding me are a thousand Sakyamuni Buddhas. Each flower supports a hundred million worlds; in each world a Sakyamuni Buddha appears. All are seated beneath a Bodhi-tree, all simultaneously attain Buddhahood. All these innumerable Buddhas have Vairocana as their original body.