Phra Dharmakosacarya (Nguam Indapañño) (Thai: พระธรรมโกศาจารย์ (เงื่อม อินฺทปญฺโญ); RTGS: Phra Thammakosachan (Ngueam Inthapanyo)), also known as Buddhadasa Bhikkhu (Thai: พุทธทาสภิกขุ; RTGS: Phutthathat Phikkhu, May 27, 1906 – May 25, 1993) was a famous and influential Thai ascetic-philosopher of the 20th century. Known as an innovative reinterpreter of Buddhist doctrine and Thai folk beliefs, Buddhadasa fostered a reformation in conventional religious perceptions in his home country, Thailand, as well as abroad. Buddhadasa developed a personal view that those who have penetrated the essential nature of religions consider "all religions to be inwardly the same", while those who have the highest understanding of dhamma feel "there is no religion".[1]

Cremation of Buddhadasa in 1993

Buddhadasa renounced civilian life in 1926. Typical of young monks during the time, he traveled to the capital, Bangkok, for doctrinal training but found the wats there dirty, crowded, and, most troubling to him, the sangha corrupt, "preoccupied with prestige, position, and comfort with little interest in the highest ideals of Buddhism."[3] As a result, he returned to his native rural district and occupied a forest tract near to his village, founding Suan Mokkh[note 1] in 1932.

In later years, Buddhadasa's teachings attracted many international seekers to his hermitage. He held talks with leading scholars and clergy of various faiths. His aim in these discussions was to probe the similarities at the heart of each of the major world religions. Before his death in 1993, he established an International Dhamma Hermitage Center across the highway from his own retreat to aid in the teaching of Buddhism and other yogic practices to international students.[4] The area of Suan Mokkh was expanded to approximately 120 acres of forest.[5]

However, Buddhadasa was skeptical of his fame; when reflecting on the busloads of visitors to Suan Mokkh he would say, "sometimes I think many of these people just stop here because they have to visit the bathroom."[6]

Buddhadasa strove for a simple, pristine practice in attempt to emulate Gautama Buddha's core teaching, "Do good, avoid bad, and purify the mind." He therefore avoided the customary ritualism and internal politics that dominated Siamese clerical life. His ability to explain complex philosophical and religious ideas in his native Southern Thai attracted many people to his wooded retreat.

His primary teaching mainly focused on the quiet awareness of one's breathing pattern called anapanasati. However, his personal practice was very much grounded in advanced research and interpretation of early Pali texts on the one hand and on his radical private experimentation on the other.

Buddhadasa, states John Powers – a professor of Asian Studies and Buddhism, offered a "rationalist interpretation" and called "the whole question of rebirth to be foolish".[7] According to Buddhadasa, the Buddha taught 'no-self' (Skt anatman, Pali anatta), which denies any substantial, ongoing entity or soul.[7] Powers quotes Buddhadasa view as, "because there is no one born, there is no one who dies and is reborn". Therefore, states Buddhadasa, "the whole question of rebirth is quite foolish and has nothing to do with Buddhism... in the sphere of the Buddhist teachings there is no question of rebirth or reincarnation". Its goal is nibbana, which Buddhadasa describes as a state "beyond all suffering that also transcends ordinary conceptions of happiness."[7]

The full quote from Buddhadasa is[8]

The Buddha refused to deal with those things that don’t lead to the extinction of dukkha. He didn’t discuss them. Take the question of whether or not there is rebirth after death. What is reborn? How is it reborn? What is its “karmic inheritance”? These questions don’t aim at the extinction of dukkha. That being so, they are not the Buddha’s teaching nor are they connected with it. They don’t lie within the range of Buddhism. Also, the one who asks about such matters has no choice but to believe indiscriminately any answer that’s given, because the one who answers won’t be able to produce any proofs and will just speak according to his own memory and feeling. The listener can’t see for herself and consequently must blindly believe the other’s words. Little by little the subject strays from Dhamma until it becomes something else altogether, unconnected with the extinction of dukkha.

Now, if we don’t raise those sorts of issues, we can ask instead, “Is there dukkha?” and “How can dukkha be extinguished?” The Buddha agreed to answer these questions. The listener can recognize the truth of every word of the answers without having to believe them blindly and can see their truth more and more clearly until he understands for himself. If one understands to the extent of being able to extinguish dukkha, that is the ultimate understanding. With such understanding one knows that, even at this moment, there is no person living; one sees without doubt that there is no self or anything belonging to a self. There is just the feeling of “I” and “mine” arising due to our being deluded by the beguiling nature of sense experience. With ultimate understanding, one knows that, because there is no one born, there is no one who dies and is reborn. Therefore, the whole question of rebirth is quite foolish and has nothing to do with Buddhism at all.

The Buddhist teachings aim to inform us that there is no person who is a self or belongs to a self. The sense of self is only the false understanding of the ignorant mind. There exist merely the natural processes of body and mind, which function as mechanisms for processing, interpreting, and transforming sense data. If these natural processes function in the wrong way, they give rise to foolishness and delusion, so that one feels that there is a self and things that belong to self. If the natural processes function in the correct way, those feelings don’t arise. There is the original mindfulness and wisdom (sati-paññā), the fundamental clear knowing and true seeing that there is no “I” or “mine.”

This being so, it follows that in the sphere of the Buddhist teachings there is no question of rebirth or reincarnation. Rather, there are the questions, “Is there dukkha?” and “How can it be quenched?” Knowing the root cause of dukkha, one will be able to extinguish it. And that root cause of dukkha is the delusion, the wrong understanding, that there is “I” and “mine.”

The matter of “I” and “mine,” ego and selfishness, is the single essential issue of Buddhism. The sense of “I” and “mine” is the one thing that must be purged completely. And it follows that in this principle lies the knowing, understanding, and practice of all the Buddha’s teachings, without exception."

Buddhadasa explains paticcasamupadda as the "birth" of "I" and mine through sense-contact with objects, and the resulting vedana ("feeling"), tanha ("thirst," craving) and upadana (clinging). It is by relinquising the notion of "I" and "mine" that selfish clinging is abandoned, and Nirvana or true emptiness will be reached.[9] This can be done by "not allow[ing] the dependent arising to take place; to cut it off right at the moment of sense-contact."[9]

Buddhadasa's views have been "strongly criticized"[10] and rejected by many of his fellow Theravada Buddhism monks with a more orthodox view of the Buddhist Dhamma. For example, Bhikkhu Bodhi states that jettisoning the rebirth doctrine "would virtually reduce the Dhamma to tatters... the conception of rebirth is an essential plank to its ethical theory, providing an incentive for avoiding all evil and doing good", summarizes Powers.[7]

A quick glance at the Pali suttas would show that none of these claims has much substance. The teaching of rebirth crops up almost everywhere in the Canon, and is so closely bound to a host of other doctrines that to remove it would virtually reduce the Dhamma to tatters. Moreover, when the suttas speak about rebirth into the five realms — the hells, the animal world, the spirit realm, the human world, and the heavens — they never hint that these terms are meant symbolically. To the contrary, they even say that rebirth occurs "with the breakup of the body, after death," which clearly implies they intend the idea of rebirth to be taken quite literally.

From the earliest period of his religious studies, Buddhadasa utilized a comparative approach and sought to be able to explain "Buddhist's teachings through other thought systems such as Taoism, Hinduism, Confucianism, Jainism and Natural Science."[12] Through such a methodology he came to adopt a religious world-view wherein he stated, "those who have penetrated to the essential nature of religion will regard all religions as being the same. Although they may say there is Buddhism, Judaism, Taoism, Islam, or whatever, they will also say that all religions are inwardly the same."[1]

In his No Religion (1993) Buddhadasa he further famously remarked:

...those who have penetrated to the highest understanding of Dhamma will feel that the thing called "religion" doesn't exist after all. There is no Buddhism; there is no Christianity; there is no Islam. How can they be the same or in conflict when they don't even exist? (...) Thus, the phrase "No religion!" is actually Dhamma language of the highest level.[1] 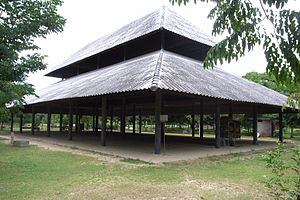 Buddhadasa's interpretations of the Buddhist tradition inspired such persons as the French-schooled Pridi Banomyong, leader of the Siamese revolution of 1932, and a group of Thai social activists and artists of the 20th century.[13]

Religious scholar Donald K. Swearer has compared Buddhadasa to the early Indian philosopher Nagarjuna,[14] and the 5th-century south Indian scholar Buddhaghosa who has "overshadowed the development of Theravada Buddhist thought" in southeast Asia.[15] According to Swearer, the Thai teacher Buddhadasa "stands in polar opposition to such normative figures as Buddhaghosa" in several respects. Buddhadasa's writings, for example, decidedly contrast with the scholastic and highly influential Visuddhimagga of Buddhaghosa.[15] Buddhadasa has been influential in the arannavasi (forest tradition) of Thai Buddhism, and his ideas have influenced the radical sectarian movement founder Santi Asoke, according to Swearer.[15]

According to scholars such as Peter Jackson and Daniel Lynch, Buddhadasa was heavily influenced by the ideas found in Zen Buddhism.[16][17] Buddhadasa considered the Zen ideas as a way to reconcile Theravada Buddhism with modern humanism, and thought them to be the reason for Japan's economic strength.[17]

Buddhadasa's works literally take up an entire room in the National Library of Thailand. The following are some of his well-known books in English translation.