From Encyclopedia of Buddhism
(Redirected from Buddhas)
Jump to navigation Jump to search
For the buddha of this era (aka "the historical Buddha"), see Gautama Buddha.

buddha (T. sangs rgyas སངས་རྒྱས་; C. fo 佛) is a epithet or title for one who has become fully "awake" or "enlightened." Generally, a buddha is one who has completely awakened from the sleep of ignorance and completely realized the true nature of all knowable things.

In brief, the word buddha is not a name but a title; its meaning is ‘one who has woken up’. This title is generally applied by the Buddhist tradition to a class of beings who are, from the perspective of ordinary humanity, extremely rare and quite extraordinary. In contrast to these Buddhas or ‘awakened ones’ the mass of humanity, along with the other creatures and beings that constitute the world, are asleep—asleep in the sense that they pass through their lives never knowing and seeing the world ‘as it is’ (yathā-bhūtaṃ). As a consequence they suffer. A buddha on the other hand awakens to the knowledge of the world as it truly is and in so doing finds release from suffering. Moreover—and this is perhaps the greatest significance of a buddha for the rest of humanity, and indeed for all the beings who make up the universe—a buddha teaches. He teaches out of sympathy and compassion for the suffering of beings, for the benefit and welfare of all beings; he teaches in order to lead others to awaken to the understanding that brings final relief from suffering.[1]

The term buddha is used as an epithet for Gautama Buddha, the buddha of our present age, as well as for buddhas of past or future ages, and for buddhas of other "world systems."

Buddha is commonly translated as "awakened one," "enlightened one," "one who is awake," etc.

The "state of enlightenment" of a buddha is called buddhahood (T. sangs rgyas kyi go 'phang). This state is achieved by following the path of the bodhisattva.

According to tradition, the bodhisattva path (or path to buddhahood) begins when one makes a vow to become a buddha in a future lifetime in order to "reestablish the dispensation or teaching (śāsana) at a time when it was lost to the world."[2]

This path entails mastering the six or ten perfections (paramitas) and can take incalculable eons.

According to tradition, this path of the bodhisattva was followed by Buddha Shakyamuni as well as all of the buddhas of the past. Thus the teaching of the Buddha is "not the innovation of an individual, but rather the rediscovery of a timeless truth...that had been discovered in precisely the same way" by all of the buddhas of the past who also followed this past.[2] The Buddha has referred to this path as "an ancient path" (Skt. purāṇamārga).[2]

One who has actualized the dharma

A buddha is one who has actualized the dharma and manifests its qualities.

One Teacher, Many Traditions states:

A buddha is praised as one who actualized the Dhamma and taught it to others. A famous passage in the in the Pali canon describes the relationship of the Dhamma and the Buddha. When speaking to the monk Vakkali, who is gravely ill and regretted not having been able to see the Buddha sooner, the Buddha replied:

This close link between the Buddha and Dhamma is reinforced by another Sutta passage, which says that a Tathāgata can be designated as ‘one having Dhamma as body’ (Dhamma-kāya)[5] and who is ‘Dhamma-become’ (Dhamma-bhūta; D.III.84). These terms indicate that a Buddha has fully exemplified the Dhamma, in the sense of the Path, in his personality or ‘body’. Moreover, he has fully realized Dhamma in the supreme sense by his experience of Nirvāṇa, the equivalent of the supreme Dhamma (A.I.156 and 158). The Arahat is no different in these respects, for he is described as ‘become the supreme’ (brahma-bhūta, S.III.83), a term which is used as an equivalent to ‘Dhamma-become’ in the above passage. Any awakened person is one who is ‘deep, immeasurable, hard-to-fathom as is the great ocean’ (M.I.487). Having ‘become Dhamma’, their awakened nature can only really be fathomed by one who has ‘seen’ Dhamma with the ‘Dhamma-eye’ of stream-entry. While Christians see Jesus as God-become-human, then, Buddhists see the Buddha (and Arahats) as human-become-Dhamma.[6]

This inseparability of a buddha and the "Dharma" is expressed through describing the Buddha as possessing two kāyas. Kāya is a Sanskrit word that literally translates as "body"; it can refer to a physical or material body, and also to a body as a collection or corpus of qualities that arise from his realization of the dharma. Hence it is said that a buddha possesses:

To say that the Buddha is dharma-kāya means that he is at once the embodiment of Dharma and the collection or sum of all those qualities—non-attachment, loving kindness, wisdom, etc.—that constitute Dharma. Thus the nature of a buddha does not inhere primarily in his visible human body—it is not that which makes him a buddha—but in his perfected spiritual qualities.[7]

The Suttas contain some very ‘human’ information on the Buddha, such as getting backache after a long teaching session (D.III.209). In the Mahāparinibbāṇa Sutta, we find the eighty-year-old Buddha expressing ‘weariness’ at the prospect of being asked about the rebirth-destiny of every person who has died in a locality (D.II.93); saying he was old and worn out and only knowing comfort when in a deep meditation (D.II.100); in his final illness, being extremely thirsty, and insisting on immediately being given water (D.II.128–9). However, elsewhere in the same text the Buddha crosses the Ganges by means of his psychic power (D.II.89); he says that, if he asked, he could have lived on ‘for a kappa, or the remainder of one’ (D.II.103), with kappa (Skt kalpa) generally meaning ‘eon’, but possibly here the maximum human life-span of around 100 years; when he lies down between two Sāl trees, where he will die, these burst into unseasonal blossom in homage to him, and divine music is heard in the sky (D.II.137–8); gods from ten regions of the universe assemble to witness the great event of a Buddha’s passing into final Nirvana at death (parinibbāna, Skt. parinirvāṇa; D.II.138–9); gods prevent his funeral pyre from igniting until the senior disciple Mahākassapa (Skt. Mahākāśyapa) arrives at the site (D.II.163).[10]

The Princeton Dictionary of Buddhism states:

All Buddhist traditions relate stories of buddhas performing miraculous feats, such as the Śrāvastī Miracles described in mainstream materials. Among the many extraordinary powers of the buddhas are a list of “unshared factors” (āveṇika-buddha-dharma) that are unique to them, including their perfect mindfulness and their inability ever to make a mistake.[2]

Ten powers based on knowledge

All buddhas possess ten powers that derive from their unique range of knowledge.[2]

All buddhas possess special skillful means (upaya-kaushalya), which is an extraordinary skill in teaching the dharma according go to the needs of sentient beings.[2]

This skillfulness distinguishes a "complete and perfect buddha" (samyaksambuddha) from a solitary buddha (pratyekabuddha) who does not teach (or teaches only through gestures).[2]

Special qualities of the Mahayana

In addition to the qualities described above, the Sanskrit Mahayana tradition identifies further qualities of the buddha

The "three bodies" (tri-kāya) are three aspects or dimensions of buddhahood, or three ways in which a buddha can manifest. These are:

The Mahayana envisions a universe filled with infinite buddha fields, where each "buddha field" (buddhakṣetra) is a realm that constitutes the domain of a specific buddha.[12]

The most famous of these buddha fields is Sukhavati, the realm of Buddha Amitābha.

All buddhas have a physical body that is adorned with:

According to tradition, these physical marks are shared by both buddhas and chakravartins. However the marks are more clear and distinct on the body of a buddha. The Buddha also has a few marks that are not found on the chakravartin, such as the protuberance on the crown of the Buddha's head.[13]

The acts of a buddha

All buddhas are said to perform certain "acts" during their lifetimes. There are different versions of the acts of a buddha, but the versions share many similarities. A set of twelve deeds is emphasized in Tibetan Buddhism. A similar list of "eight episodes" (baxiang) is common in East Asian Buddhism. The Pali tradition identifies thirty deeds that are common to all buddhas.[14]

The twelve deeds emphasized in Tibetan Buddhism are:

In addition to Buddha Shakyamuni, there are many other buddhas named in Buddhist literature. These include buddhas of the past, present, and future, as well as buddhas of different "world systems."

In Buddhist cosmology, there can only be one buddha at a time in any world system. The "age" of a buddha is considered to last as long as their "dharma" is present in the world.

Seven buddhas of the past

An engraving of "The Seven Buddhas" at Sanchi.

Seven buddhas of the past are identified in the early texts of both the Sanskrit and Pali traditions.

Main article: List of the named Buddhas in the Pali Canon

In the Pali tradition, twenty-nine buddhas are named in the Buddhavamsa. This list includes: 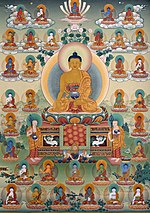 The 35 Buddhas of Confession

In the Sanskrit tradition, the following named buddhas are identified: