Buddhism includes a wide array of divine beings that are venerated in various ritual and popular contexts. Initially they included mainly Indian deities such as devas and yakshas, but later came to include other Asian spirits and local gods. They range from enlightened Buddhas to regional spirits adopted by Buddhists or practiced on the margins of the religion.

Buddhists later also came to incorporate aspects from countries such as China and Japan into their pantheons.[1] As such, it includes many aspects taken from other mythologies of those cultures. Saraswati is a Hindu Deva from Gandhara and the kami[1] are considered to be local, Japanese bodhisattvas by many Japanese Buddhists. 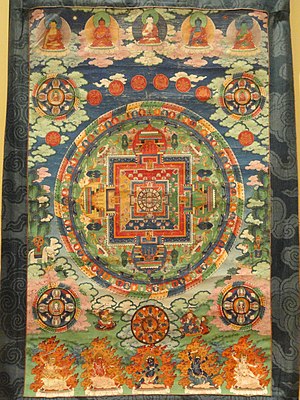 Mandala of the five Buddha families

A Buddha is a being who is fully awakened, and has fully comprehended the Four Noble Truths. In the Theravada tradition, while there is a list of acknowledged past Buddhas, the historical Gautama Buddha is the only Buddha of our current era and is generally not seen as accessible or as existing in some higher plane of existence. Mahayana Buddhists however venerate several Buddhas, including Maitreya and Amitābha, who are seen as beings of great wisdom and power who preside over pure lands that one can travel to after death.

In Tantric Buddhism (Vajrayana), there are five primary Buddhas: Vairocana, Aksobhya, Ratnasambhava, Amitābha, and Amoghasiddhi. Each is associated with a different consort, direction, aggregate (or, aspect of the personality), emotion, element, color, symbol, and mount.[2] Other Buddhas besides these five include Bhaisajyaguru (the Buddha of medicine) and Nageshvara Raja (the king of the Nāgas).

There is also the idea of the Adi-Buddha, the "first Buddha" to attain Buddhahood. Variously named as Vajradhara, Samantabhadra and Vairocana, the first Buddha is also associated with the concept of Dharmakaya.

Buddhist Tantra also includes several female Buddhas, such as Tara, the most popular female Buddha in Tibetan Buddhism, who comes in many forms and colors. Other female Buddha figures include Vajrayogini, Nairatmya, and Kurukullā.

Some historical figures are also seen as Buddhas, such as the Buddhist philosopher Nagarjuna and the figure of Padmasambhava. 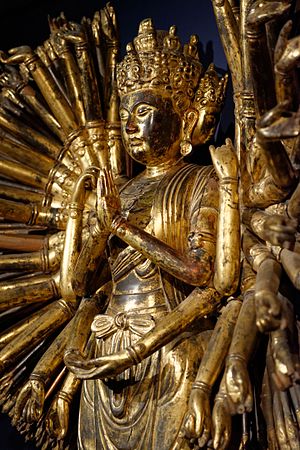 A Bodhisattva is any being that has aroused bodhicitta (awakening mind) and is thus working towards full Buddhahood. Bodhisattvas who are seen as powerful and highly advanced are also venerated in Mahayana and Vajrayana Buddhism. The most popular Bodhisattva is Avalokiteshvara also known as Guanyin in East Asia, known as the bodhisattva of compassion.[3]

In Vajrayana, the major bodhisattvas are known as 'The eight Bodhisattvas':[4]

Others include Candraprabha, Suryaprabha, Vajrasattva. Followers of Tibetan Buddhism consider reborn tulkus such as the Dalai Lamas to be emanations of bodhisattvas.

In the Buddhist Tantras, Buddhas and Bodhisattvas often manifest in unusual and fierce forms, which are used in tantra as yidams or meditation deities.[5]

The Yidam, or Ishta-devata, is a personal meditation deity. The Sanskrit word iṣṭadevatā or iṣṭadevaḥ is defined by V. S. Apte as "a favorite god, one's tutelary deity."[7] Though this term is used in many popular books on Buddhist Tantra, the term işţadevatā has not been attested in any Buddhist tantric text in Sanskrit. The unrelated Tibetan version of the term, possibly of entirely native origin, is yi-dam[8] is said to be a contraction of Tib. yid-kyi-dam-tshig,[9] meaning "samaya of mind"- in other words, the state of being indestructibly bonded with the inherently pure and liberated nature of mind.

The Ishta-devata of Hinduism is an aspect of God for personal worship.[10] In Buddhism, a Yidam is a manifestation of enlightenment[11] and may take the form of Sambhogakāya Buddhas, tantric deities, bodhisattvas, Dharma protectors or other historical figures.[11]

Devas are divine beings, though they are not all necessarily wise or on the Buddhist path and hence not final objects of refuge. They have very long lives which have much less suffering than humans, but are not immortal or immune from suffering. Some devas have no physical form and exist in the formless realms. Some devas venerated by Buddhists include Brahma, Sarasvati, Laksmi, Śakra, Hariti, Pattini, Saman and Ganesha.

The Yaksha are a broad class of nature-spirits, usually benevolent, who are caretakers of the natural treasures hidden in the earth and tree roots.[12] Having been worshiped in India since before the Vedic period, Hinduism adopted the worship of Yakshas like Kuber. Later their worship was adopted by Buddhism. In Jainism Yakshas were worshipped as Shasana Devatas from the beginning.

In Buddhism, it is believed that they reside deep within the Earth under the Himalayas[13] where they guard the wealth of the Earth.[13] The Yaksha are ruled over by Kubera, the Lord of wealth.[13]

In Burma there exists the popular worship of nature spirits called Nats which are worshiped alongside of Buddhism.