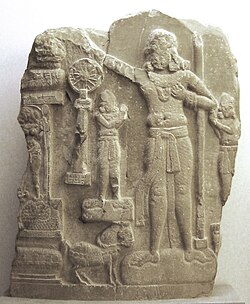 Chakravartin (Skt., also cakravartin, cakravartirāja; P. cakkavattin; T. ’khor lo sgyur ba’i rgyal po འཁོར་ལོ་སྒྱུར་བའི་རྒྱལ་པོ་; C. zhuanlun wang; J. tenrin’ō; K. chŏllyun wang 轉輪王), literally "wheel-turning emperor", refers to a type of universal monarch within Buddhist cosmology who rules over his domain in accordance with the dharma. According to tradition, there is only one chakravartin at a time within a world system, in a similar way that there is only one buddha at a time. The chakravartin has similar physically attributes to a buddha, but lacks the mental and supernatural powers of a buddha.

The power of the charavartin derives from a mystical wheel with divine attributes.

The Abhidharma-kosha identifies four classes of chakravartin. Each type has a wheel forged from a different element (gold, silver, copper, or iron), which corresponds to their power and the size of thier domain.[1][2]

According to Princeton Dictionary of Buddhism, "the cakravartins discussed in the sūtras typically refers to a suvarṇa-cakravartin, who conquers the world through the sheer power of his righteousness and charisma."[5]

Comparison to a buddha

Chakravartins have similar physical attributes to a buddha. Like the buddhas, a chakravartin is said to be endowed with the thirty-two major marks and the eighty minor marks of a superior person.[2]

Chakravartins do not posess all of the mental and super-natural attributes of the buddhas. According to StudyBuddhism:

Although wheel-wielding emperors [cakravartins] share the same bodily features of a Sambhogakaya and Supreme Nirmanakaya Buddha, they lack the other qualities of a Buddha and thus are not fitting objects indicating safe direction. For example, a wheel-wielding emperor cannot emanate innumerable bodies simultaneously throughout all universes in order to benefit all limited beings. Further, according to Mahayana, a Buddha’s enlightening body pervades all Buddha-fields (sangs-rgyas-kyi zhing) and all Buddha-fields appear in every pore of a Buddha’s enlightening body. Wheel-wielding emperor’s lack such inconceivable physical qualities.[2]

According to traditional Buddhist sources, when the Gautama Buddha was born, sages predicted that he was destined to become either a universal monarch (a chakravartin) or a universal spiritual guide (a buddha). In choosing to renounce worldly life, the Buddha choose the later path.[7][8]

This paralleling of a Cakkavattin and a Buddha is also made in relation to other events of Gotama’s life, and indicates the idea of a Buddha having universal spiritual ‘sovereignty’ – i.e. influence – over humans and gods. It also indicates that Gotama renounced the option of political power in becoming a Buddha. He certainly had no political pretensions, as Muhammad had, and was not seen as a political threat by the rulers of his day, as was Jesus. He did, however, teach kings and give teachings on how best to govern a realm.[7]

Buddhist societies distinguish between two world-moving wheels, the wheel of political power (anachakra) and the wheel of moral-spiritual power (dharmachakra). The Buddha’s followers honored him with the title Chakravartin because he turned the latter wheel, setting it rolling over the earth for the awakening and benefit of all beings. The similar double meaning of messiah plays a role in the story of Jesus.[9]

Chakravartin is a bahuvrīhi compound word, figuratively meaning "whose wheels are moving", in the sense of "whose chariot is rolling everywhere without obstruction". It can also be analysed as an instrumental bahuvrīhi: "through whom the wheel is moving". The equivalent Tibetan term (T. ’khor lo sgyur ba’i rgyal po) translates as "monarch who controls by means of a wheel".[10]