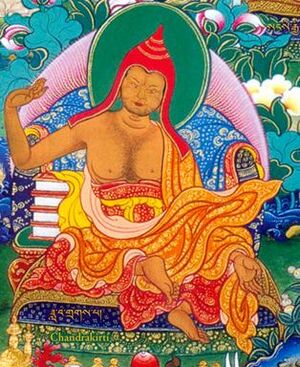 Chandrakirti (Skt. Candrakīrti; Tib. zla ba grags pa ཟླ་བ་གྲགས་པ་; C. Yuèchēng 月稱) (c. 600 – c. 650) was an Indian scholar of the Madhyamaka school and a noted commentator on the works of Nagarjuna and those of his main disciple, Aryadeva. His most influential works are Prasannapadā (Clear Words) and Madhyamakāvatāra.[1]

Very little is known about Chandrakirti's life.[1] Tibetan sources state that he was born in South India and was a student of Kamalabuddhi. He is traditionally associated with Nalanda Mahavihara where he may have been a monk.[1]

Of foremost importance in Tibetan presentations of emptiness is the seventh-century Indian Candrakirti, whose writings form the basis for studying the Middle Way in many Tibetan monasteries. Candrakirti is celebrated as offering the most thorough and accurate vision of Nagarjuna's emptiness, which, in turn, most fully represents the final truth of the Buddha's teaching. Candrakirti's idea of emptiness denies any existence to "nature" (svabhāva, rang bzhin), rejecting any enduring essence in ourselves or anywhere in the phenomenal world. In this view, our false belief in natures is at the root of our ignorance and the basis for all manner of emotional turbulence. For many Tibetan scholars, only Candrakirti's Middle Way entirely overcomes our false belief in natures and, consequently, alone overcomes ignorance and proffers freedom from cyclic existence.[2]

In the Tibetan scholastic tradition, Chandrakirti's views on emptiness are often contrasted with those of the Indian scholar Bhāviveka. The two "schools of thought" that developed around their respective views are referred to as prasangika and svatantrika, respectively.

Candrakirti frequently appears in Tibetan presentations of the Middle Way alongside Bhavaviveka (c. 500-570), whose own version of emptiness followed Nagarjuna's insights on the whole but, some maintain, failed to overcome all traces of belief in natures. Bhavaviveka, according to some interpretations, held that no nature could be found anywhere, ultimately, but that conventionally the notion of natures proved quite useful in explaining the everyday world. Candrakirti argued in his Clear Words (Prasannapada) against Bhavaviveka, despite their many commonalities as followers of Nagarjuna. Candrakirti's argument served as proof for many in Tibet that Candrakirti's emptiness was the final explanation of reality, uniquely complete, and singularly capable of yielding liberation.

Candrakirti's critique of Bhavaviveka also formed the locus classicus for dividing the Middle Way into two camps, based on allegiance to or thematic similarity with the views of Candrakirti and Bhavaviveka. From an early period of the transmission of Buddhism, Tibetan scholars developed the genre of doxography (grub mtha; siddhanta) that, similar to Latinate compilations of Greek philosophers, organized important figures into perceived systems of thought. While Indian Buddhist authors composed similar texts, Tibetan doxographies uniquely divided the Middle Way into subschools centered round Candrakirti and Bhavaviveka. In Tibetan estimations, Candrakirti's subschool, Prasangika, consistently ranks ahead of Bhavaviveka's Svatantrika subschool at the pinnacle of all Buddhist viewpoints. Candrakirti's unique view of emptiness accounts, in some interpretations, for his top ranking.[2]