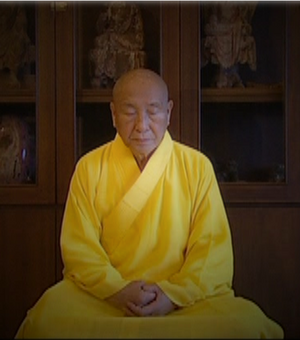 Chan (J. Zen; K. Sŏn; V. Thiền 禪) is one of the major forms of East Asian Buddhism, which orginated in China around the fifth or sixth century, and was then transmitted from China into Korea (as Korean Seon), Japan (as Japanese Zen) and Vietnam (as Vietnamese Thiền). In the West, this form of Buddhism is most commonly known by the Japanese name of "Zen".

Some of these specialists adopted the term chan as the formal name of their community (Chan zong), perhaps sometime during the sixth or seventh centuries. These early “Chan” communities gathered around a number of charismatic teachers who were later considered to be “patriarchs” (zushi) of their tradition.[2]

The Indian monk Bodhidharma was retrospectively named as the "first patriarch" and founder of the tradtion.[2]

Bodhidharma is said to have traveled from India to China in the fifth or sixth century CE. According to Rupert Gethin, “it is likely that the roots of Ch’an lie further back in Chinese Buddhist history.”[3]

Rupert Gethin describes the philosophical basis of Chan as follows:

Bodhidharma is said to have emphasized the teachings of the Lankavatara Sutra, and the theoretical basis of Ch’an centres on the notions of the tathāgatagarbha and ‘emptiness’ as pointing beyond all conceptual forms of thought. Our innermost nature is simply the Buddha-nature (fo-hsing) which is to be realized in a direct and sudden experience of inner awakening (wu/satori).[3]

The philosophical background of Chan comes from various texts and streams of thought. One is the Perfection of Wisdom Sutras, especially the Heart Sutra and Diamond-cutter Sutra and their idea of emptiness, two levels of truth, and paradoxical modes of expression. Another is the Lankavatara Sutra, a Yogacara text which also draws on ideas of the Tathgata-garbha. The Indian Yogcara school saw human experience as a projection out of the ‘storehouse consciousness’, due to the maturation of karmic seeds in it. The Lankavatara Sutra equated this kind of unconscious mind with the Tathgata-garbha... Another influence came from the above two texts on the ‘Buddha-nature’: the ‘Treatise on the Buddha-nature’ and ‘Treatise on the Awakening of Faith in the Mahayana’. As the Dharma-kaya, the ‘One Mind’ of the latter text is seen in Chan as the ‘original enlightenment’ of all beings... Many of these ideas are also found in the Huayan school, with its ideas of the One Mind as the unifying principle from which everything is made... In many ways Huayan can be seen as the philosophical counterpart of Chan.[4]

Around the ninth century in China, there were five schools of Chan. But following a government suppression of Buddhism in 842, only two schools emerged:[5][6]

"While the Japanese forms of these two schools have remained separate, they merged in China during the Ming dynasty (1368– 1644)."[6]