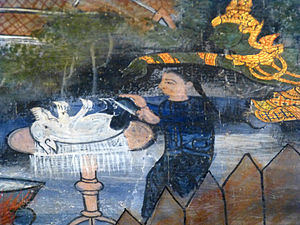 Before entering the parinirvāṇa, the Buddha told Ānanda to visit Cunda and tell him that his meal had nothing to do with his getting ill, and therefore should feel no blame nor remorse; on the contrary, offering the Tathāgata his last meal before passing away was of equal gain as of offering him his first meal before attaining buddhahood, and thus he should rejoice.[3][4]

Cunda as a lay follower of Gautama Buddha

In the Cunda Kammāraputta Sutta, Gautama Buddha stays at Cunda's mango grove and they talk about rites of purification. Cunda declares that he approves of the rites of the brahmins of the West and the Buddha mentions that the rites of purification of these brahmins and the purification in the discipline of the noble ones is quite different. Cunda asks him to explain how there is purification in his discipline, and so the Buddha teaches him the ten courses of skillful action. Cunda praises him for his teachings and declares himself a lay follower from that day on.[5]

In the Mahāparinibbāṇa Sutta, Gautama Buddha and a group of bhikkus are on their way to Kuśīnagara when they visit Cunda's mango grove in Pāvā. Cunda offers a meal to the Buddha and his group. The meal consists of sweet rice, cakes and sūkaramaddava, which is translated differently depending on the buddhist tradition. Since the word is composed by sūkara, which means pig, and maddava, which means soft, tender, delicate, two alternatives are possible:

In the latter meaning, the term has been thought to refer to a mushroom or truffle, or a yam or tuber.[note 2] The idea that the Buddha's last meal consisted of pork is generally supported by the Theravada tradition; while that it was a vegetarian dish, by the Mahayana tradition.[6] These may reflect the different traditional views on Buddhist vegetarianism and the monastic precepts.

In the sutta, the Buddha asks Cunda to serve the rice and cakes to the community of bhikkus, and to only serve the sūkaramaddava to him. Any leftovers should be buried in a pit. Cunda does as he is told.[4]