From Encyclopedia of Buddhism
Jump to navigation Jump to search
For the current Dalai Lama, see 14th Dalai Lama.

Dalai Lama is a title given to members of a prominent incarnation lineage with a particularly close connection with Je Tsong Kahpa and the Gelug school of Tibetan Buddhism[1]. The successive Dalai Lama incarnations were the temporal leaders of the Tibetan state from 1642, during the time of the 5th Dalai Lama, until 1959, when the 14th Dalai Lama fled Tibet to escape the Chinese Communist occupation.[2]

The current Dalai Lama, The 14th Dalai Lama Tenzin Gyatso was the leader of the Central Tibetan Administration (the government for the Tibetans in exile) from 1960 until 2011, at which time he retired from his leadership role.

The title of "Dalai Lama" is taken from the name given by Altan Khan, the leader of the Tumed Mongols, to the 3rd Dalai Lama. "Dalai" is the Mongolian word for "ocean" or "big"[3] (coming from Mongolian title Dalaiyin qan or Dalaiin khan,[4] translated as 'Gyatso' in Tibetan). And "Lama" is the Tibetan for for a "guru" or "teacher" from the Tibetan word བླ་མ་ (bla-ma) meaning "master, guru".[5]

The Dalai Lama is also considered to be the successor in a line of tulkus who are believed[6] to be incarnations of Avalokiteśvara,[7] a Bodhisattva of Compassion.[8][9][7][6]

The Dalai Lama figure is important for many reasons. Since the time of the 5th Dalai Lama in the 17th century, his personage has always been a symbol of unification of the state of Tibet, where he has represented Buddhist values and traditions.[10] The Dalai Lama was an important figure of the Geluk tradition, which was politically and numerically dominant in Central Tibet, but his religious authority went beyond sectarian boundaries. While he had no formal or institutional role in any of the religious traditions, which were headed by their own high lamas, he was a unifying symbol of the Tibetan state, representing Buddhist values and traditions above any specific school.[11] The traditional function of the Dalai Lama as an ecumenical figure, holding together disparate religious and regional groups, has been taken up by the present fourteenth Dalai Lama. He has worked to overcome sectarian and other divisions in the exiled community and has become a symbol of Tibetan nationhood for Tibetans both in Tibet and in exile.[12]

From 1642 until 1705, and from 1750 to the 1950s, the Dalai Lamas or their regents headed the Tibetan government (or Ganden Phodrang) in Lhasa which governed all or most of the Tibetan Plateau with varying degrees of autonomy[13] under the Qing Dynasty of China, up to complete sovereignty.[14] This Tibetan government also enjoyed the patronage and protection of firstly Mongol kings of the Khoshut and Dzungar Khanates (1642–1720) and then of the emperors of the Manchu-led Qing dynasty (1720–1912).[13] Tibet's sovereignty was later rejected, however, by both the Republic of China and the current People's Republic of China.[15]

In the Tibetan Buddhist tradition, it is believed that Avalokiteśvara, the bodhisattva of compassion, has a special relationship with the people of Tibet and as such the bodhisattva has incarnated as benevolent rulers and teachers during the course of Tibetan history. The Dalai Lama incarnation lineage holders are believed to be incarnations of Avalokiteshvara.

The Book of Kadam, an important text within the Gelug tradition, is said to have laid the foundation for the Tibetans' later identification of the Dalai Lamas as incarnations of Avalokiteśvara.[16]

Establishment of the lineage

The title and special role of "Dalai Lama" began when the 3rd Dalai Lama Sonam Gyaltso served as the spiritual teacher for the Mongol ruler Altan Khan. Altan Khan, who is credited with converting the Tumed Mongols to Buddhism, bestowed the title of "Dalai Lama" on Sonam Gyatso. The title was assigned retroactively to Sonam Gyaltso's two previous incarnations, who are now counted as the first and second Dalai Lamas.[17]

There have been 14 recognised incarnations of the Dalai Lama:

There has also been one non-recognised Dalai Lama, Ngawang Yeshe Gyatso, declared 28 June 1707, when he was 25 years old, by Lha-bzang Khan as the "true" 6th Dalai Lama – however, he was never accepted as such by the majority of the population.[21][22][23]

The 1st Dalai Lama was based at Tashi Lhunpo Monastery, which he founded, the Second to the Fifth Dalai Lamas were mainly based at Drepung Monastery outside Lhasa. In 1645, after the unification of Tibet, the Fifth moved to the ruins of a royal fortress or residence on top of Marpori ('Red Mountain') in Lhasa and decided to build a palace on the same site. This ruined palace, called Tritse Marpo, was originally built around 636 AD by the founder of the Tibetan Empire, Songtsen Gampo for his Nepalese wife.[24] Amongst the ruins there was just a small temple left where Tsongkhapa had given a teaching when he arrived in Lhasa in the 1380s.

The Fifth Dalai Lama began construction of the Potala Palace on this site in 1645,[25] carefully incorporating what was left of his predecessor's palace into its structure.[26] From then on and until today, unless on tour or in exile the Dalai Lamas have always spent their winters at the Potala Palace and their summers at the Norbulingka palace and park. Both palaces are in Lhasa and approximately 3 km apart.

Following the failed 1959 Tibetan uprising, the 14th Dalai Lama sought refuge in India. The then Indian Prime Minister, Jawaharlal Nehru, allowed in the Dalai Lama and the Tibetan government officials to reside in India.

The Dalai Lama has since lived in exile in McLeod Ganj, in the Kangra district of Himachal Pradesh in northern India, where the Central Tibetan Administration is also established. His Holiness's residence on the Temple Road in McLeod Ganj is called the Dalai Lama Temple and is visited by people from across the globe. Tibetan refugees have constructed and opened many schools and Buddhist temples in Dharamshala.[27]

Future of the position 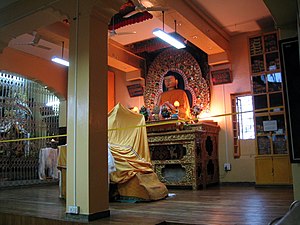 The main teaching room of the Dalai Lama in Dharamshala, India

The 14th Dalai Lama said as early as 1969 that it was for the Tibetans to decide whether the institution of the Dalai Lama "should continue or not".[28] He has given reference to a possible vote occurring in the future for all Tibetan Buddhists to decide whether they wish to recognize his rebirth.[29] In response to the possibility that the PRC might attempt to choose his successor, the Dalai Lama said he would not be reborn in a country controlled by the People's Republic of China or any other country which is not free.[30][31] According to Robert D. Kaplan, this could mean that "the next Dalai Lama might come from the Tibetan cultural belt that stretches across northern India, Nepal, and Bhutan, presumably making him even more pro-Indian and anti-Chinese".[32]

The 14th Dalai Lama supported the possibility that his next incarnation could be a woman.[33] As an "engaged Buddhist" the Dalai Lama has an appeal straddling cultures and political systems making him one of the most recognized and respected moral voices today.[34] "Despite the complex historical, religious and political factors surrounding the selection of incarnate masters in the exiled Tibetan tradition, the Dalai Lama is open to change," author Michaela Haas writes.[35] "Why not? What's the big deal?"[36]