Deity yoga (Tibetan: lha'i rnal 'byor; Sanskrit: Devata-yoga) is a practice of Vajrayana Buddhism involving identification with a chosen deity through visualisations and rituals, and the realisation of emptiness. According to the Tibetan scholar Tsongkhapa, deity yoga is what separates Buddhist Tantra practice from the practice of other Buddhist schools.[1] 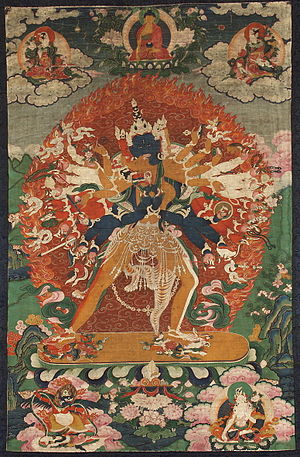 The purpose of Deity yoga is to bring the meditator to the realization that the yidam or meditation deity and the practitioner are in essence the same, that they are non-dual (advaya). According to John Powers. "Deity yoga is a technique for becoming progressively more familiar with the thoughts and deeds of a buddha, until the state of buddhahood is actualized through repeated practice."[4]

According to Gyatrul Rinpoche, the point of this practice is to "understand your buddha nature, which is the very essence of your being" and is "intrinsically present" in all beings.[5] The fact that the deity is a reflection of qualities already inherent in the practitioner is what makes this practice different than mere deluded or wishful thinking.[6]

The yidam generally appears in a mandala and the practitioner visualizes himself or herself and their environment as the yidam and mandala of their Deity Yoga practice. This visualization method undermines a habitual belief that views of reality and self are solid and fixed, enabling the practitioner to purify spiritual obscurations (Sanskrit: kleshas) and to practice compassion and wisdom simultaneously:

Deity Yoga employs highly refined techniques of creative imagination, visualisation, and photism in order to self-identify with the divine form and qualities of a particular deity as the union of method or skilful means and wisdom. As His Holiness the Dalai Lama says, "In brief, the body of a Buddha is attained through meditating on it".[7]

Representations of the deity, such as a statues, paintings (Tibetan: thangka), or mandalas, are often employed as an aid to visualization in both the Generation Stage (Tibetan: Kye-rim) and the Completion Stage (Tibetan: Dzog-rim) of Anuttarayoga Tantra. The mandalas are symbolic representations of sacred enclosures, sacred architecture that house and contain the uncontainable essence of a yidam. In the book, The World of Tibetan Buddhism, the Dalai Lama describes a mandala: “This is the celestial mansion, the pure residence of the deity.”

Mandala of the Forms of Manjushri, the Bodhisattva of Transcendent Wisdom

Mandalas are used as an aid in realizing the inner ground:

[E]xternal ritual and internal sadhana form an indistinguishable whole, and this unity finds its most pregnant expression in the form of the mandala, the sacred enclosure consisting of concentric squares and circles drawn on the ground and representing that adamantine plane of being on which the aspirant to Buddhahood wishes to establish himself. The unfolding of the tantric ritual depends on the mandala; and where a material mandala is not employed, the adept proceeds to construct one mentally in the course of his meditation.[8]

The generation stage engages creative imagination or visualization as an upaya or skillful means of personal transformation through which the practitioner (sadhaka) either visualizes a meditational deity (yidam) or refuge tree before themselves in front generation, or as themselves in self generation, to engender an alteration to their perception and/or experience of the appearance aspect of reality.[9] One practices oneself in the identification with the meditational Buddha or deity (yidam) by visualisations, until one can meditate single-pointedly on being the deity.[note 1]

According to Tsongkhapa, throughout the various stages of visualization one is to maintain the cognition of emptiness and "one trains in [causing] everything to appear as like illusions".[10] Reginald Ray writes that during the process of yidam visualization, the deity is to be imaged as not solid or tangible, as "empty yet apparent", with the character of a mirage or a rainbow.[11]

In the generation stage of Deity Yoga, the practitioner visualizes the "Four Purities" (Tibetan: yongs su dag pa bzhi; yongs dag bzhi)[web 1] which define the principal Tantric methodology of Deity Yoga that distinguishes it from the rest of Buddhism:[12]

Front generation is a form of meditative visualization employed in Tantric Buddhism in which the Yidam is visualized as being present in the sky facing the practitioner as opposed to the self-identification that occurs in self generation. According to the Vajrayana tradition, this approach is considered less advanced, hence safer for the sadhaka, and is engaged more for the rites of propitiation and worship.[13]

Self generation is a form of meditative visualization employed in Tantric Buddhism in which the yidam is invoked and then merged with the sadhaka as an upaya of self-transformation. This is as opposed to the method of front generation. According to the Vajrayana tradition, self generation is held to be more advanced and accompanied by a degree of spiritual risk from the siddhi it may rapidly yield.[14]

An important element of this is "divine pride", which is "the thought that one is oneself the deity being visualized."[15] According to John Powers, "divine pride is different from ordinary, afflicted pride because it is motivated by compassion for others and is based on an understanding of emptiness. The deity and oneself are both known to be empty, all appearances are viewed as manifestations of the luminous and empty nature of mind, and so the divine pride of deity yoga does not lead to attachment, greed, and other afflictions."[16]

A painting of a yogi showing the central energy channel and side channels.

The completion stage (Tibetan:dzok-rim, (Wyl: rdzogs rim); Sanskrit:saṃpanna-krama) is the second stage of deity yoga. Completion stage may also be translated as "perfection stage" or "fulfillment mode." In the completion stage one engages in practices associated with the subtle body energies and dissolves the deity into sunyata.

The completion stage employs the "mystic vortices" of the body, the cakra, the subtle energy of the subtle body, the five pranas or vāyu, together with the channels, the nadi through which the energy flows in order to generate the 'great bliss' (Tibetan: Dem Chog or bde-mchog; Sanskrit: Maha-sukha) associated with bodhi or enlightenment.[23] According to Keith Dowman,

On the complete stage, we cause the energy-winds (rlung, Skt. prana) to enter, abide, and dissolve in the central channel. This enables us to access the subtlest level of mental activity (clear light, ‘ od-gsal) and use it for the nonconceptual cognition of voidness – the immediate cause for the omniscient mind of a Buddha. We use the subtlest level of energy-wind, which supports clear light mental activity, to arise in the form of an illusory body (sgyu-lus) as the immediate cause for the network of form bodies (Skt. rupakaya) of a Buddha.[25]

The completion stage is defined differently in various strands on Vajrayana practice:

According to Keith Dowman,