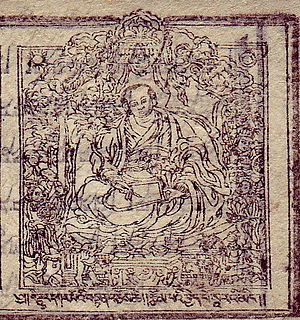 By some accounts, Sangye Gyatso is believed to be the son of the "Great Fifth".[4] He ruled as regent, hiding the death of the Dalai Lama, while the infant 6th Dalai Lama was growing up, for 16 years. During this period, he oversaw the completion of the Potala Palace and warded off Chinese politicking.

He is also known for harboring disdain for Tulku Dragpa Gyaltsen. According to Lindsay G. McCune in her thesis (2007), Desi Sangye Gyamtso refers in his Vaidurya Serpo to the Lama as the "pot-bellied official" (nang so grod lhug) and states that, following his death, he had an inauspicious rebirth.[5]

File:TibChakra.jpg
A drawing from the Blue Beryl illustrating the Tibetan Buddhist view of the chakras (Tib. rsta-khor) and sushumna (Tib. dbu-ma). The tradition emphasizes the existence of five major chakras which are depicted possessing twenty-four spokes said to symbolize their ability to generate and link with the numerous subtle meridians or currents (Tib. rsta). The Brow end Throat centers are associated with the cosmic plane (Tib. stod), the Heart center to the human plane (Tib. bar). and the Solar and Vitality centers to the earth plane (Tb. smad).[6]

The medical college at Chagpori (lchags po ri; "Iron Mountain") was designed for monastic scholars who would, after learning esoteric arts of medicine and tantrism, mostly remain in the monastery, serving the public as would other monk scholars and lamas. In 1916, Khenrab Norbu, physician to the 13th Dalai Lama, sponsored the construction of a second secular college of Tibetan medicine and Astrology, the Mentsikhang. Mentsikhang was designed as a college for 'laypersons' who would, after receiving training, return to their rural areas for work as doctors and educators.

Six medicinal substances were in common use in Tibet when they appeared in the Blue Beryl Treatise:[7][8]

Sangye Gyatso became regent or desi of Tibet at the age of 26 in 1679. Three years later, in 1682, the 5th Dalai Lama died. However, his demise was kept secret until 1696-97, and the desi governed Tibet. In many ways he was a remarkably efficient politician who concluded a war with Ladakh that enabled the Tibetan regime to acquire the Ngari region in 1684. He entertained close contacts with Galdan Boshugtu Khan, the ruler of the emerging Dzungar Khanate of Inner Asia, with the aim of countering the role of the Khoshut Mongols in Tibetan affairs. The Khoshut khans had functioned as protector-rulers of Tibet since 1642 but their influence had been on the wane since 1655. The supposed reincarnation of the Dalai Lama was born in 1683 and discovered two years later. He was secretly educated in Nankhartse while Sangye Gyatso proceeded to hide the death of his master. It was only in 1697 that the Sixth Dalai Lama, Tsangyang Gyatso, was installed.[9] This evoked great irritation from the Qing Kangxi Emperor who had been kept in the dark about the matter, and furthermore was an enemy of the Dzungar rulers. Meanwhile, a new and ambitious Khoshut ruler came to power, Lha-bzang Khan.

The murder of the desi

The Sixth Dalai Lama turned out to be a talented but boisterous young man who preferred poetry-writing and the company of young women to monastic life. In 1702 he renounced his monastic vows and returned to lay status but retained his temporal authority.

In the next year, Sangye Gyatso formally turned over the regent title to his son, Ngawang Rinchen, but in fact kept the executive powers. Now, a rift emerged within the Tibetan elite. Lha-bzang Khan was a man of character and energy who was not content with the effaced state in which the Khoshut royal power had sunk. He set about to change this, probably after an attempt by Sangye Gyatso to poison the king and his chief minister. Matters came to their head during the Monlam Prayer Festival in Lhasa in 1705, which followed the Losar (New Year). During a grand meeting with the clergy, Sangye Gyatso proposed to seize and execute Lha-bzang Khan. This was opposed by the cleric Jamyang Zhépa from Drepung Monastery, the personal guru of Lha-bzang. Rather, the khan was strongly recommended to leave for Qinghai, the usual abode of the Khoshut elite. He pretended to comply and started his journey to the north.

However, when Lha-bzang Khan reached the banks of the Nagchu River northeast of Ü-Tsang, he halted and began to gather the Khoshut tribesmen. In the summer of 1705 he marched on Lhasa and divided his troops in three columns, one under his wife Tsering Tashi. When Sangye Gyatso heard about this he gathered the troops of Ü-Tsang, Ngari and Kham close to Lhasa. He offered battle but was badly defeated with the loss of 400 men.

The Lobsang Yeshe, 5th Panchen Lama tried to mediate. Realizing that his situation was hopeless, Sangye Gyatso gave up resistance on condition that he was spared and was sent to Gonggar Dzong west of Lhasa. However, the vengeful Queen Tsering Tashi arrested the ex-desi and brought him to the Tölung Valley, where he was killed, probably on 6 September 1705.[10]