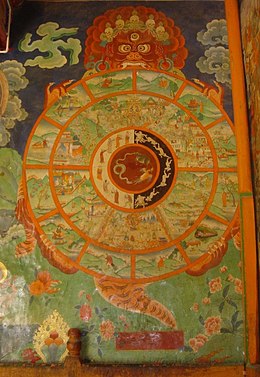 Tibetan Bhavacakra or "Wheel of Life" in Sera, Lhasa.

The desire realm (Sanskrit: कामधातु kāma-dhātu) is one of three realms (Sanskrit: dhātu, Tibetan: khams) or three worlds (S. triloka) in traditional Buddhist cosmology into which a being wandering in saṃsāra may be reborn. The other two are the form realm, (S. rupa-dhātu) and the formless realm (S. ārupa-dhatu).[1]

Within the desire realm are either five or six domains (S.: gati, also sometimes translated as "realm"). In Indo-Tibetan Mahāyāna Buddhism there are six domains ([rigs drug gi skye gnas] error: {{lang-xx}}: text has italic markup (help)) and in Theravada Buddhism there are only five, because the domain of the asuras is not regarded as separate from that of the devas. Taoism also features the five realms.[2][3][4][5]

The Shurangama Sutra in Mahayana Buddhism regarded the 10 kinds of Xian (Taoism) as a separate Immortal realm between the Deva and Human realms.[6][7]

The thirty-one realms are also known as the "thirty-one paths of rebirth", the "six paths of suffering", the "six planes", and the "six lower realms". They stand in contrast to the higher attainments of the Ten spiritual realms.

One's previous actions and thoughts determine which of the six domains one is reborn into.

The 8th century Buddhist monument Borobudur in Central Java, Indonesia, took the concept of these three realms. The stages of Kamadhatu, Rupadhatu, and Arupadhatu, are incorporated into the architectural design with the plan of mandala that took the form of a stepped stone pyramid crowned with stupas.[8]

The six domains of the desire realm are as follows:

The Deva realm is the realm of bliss. The disadvantage of this realm is that things are so very comfortable there, that these beings completely neglect to work towards enlightenment. Instead they gradually use up the good karma they had previously accumulated, and so they subsequently fall to a lower rebirth.

The Deva realm is sometimes also referred to as the gods' realm, because its inhabitants are so powerful within their own realm, that compared to humans, they resemble the gods of Greek or Roman mythology. However, while the Devas may be referred to as gods, they are not immortal, omniscient, nor omnipotent, and they do not act as creators or judges at death, so they are notably very distinct from the monotheistic Western concept of a god.

The Asura realm is the realm of the demigods. They are here because of actions based on egoic jealousy, envy, insincerity, struggle, combat or rationalization of the world. They may be here because in human form they had good intentions but committed bad actions such as harming others. The Asuras of some inferior realms however, are malevolent (such as the corruptor Mara) and can be more closely related to the translation of demon that is sometimes ascribed to them. These can be alternatively referred to as Rakshasas.

The Asuras are said to experience a much more pleasurable life than humans, but they are plagued by envy for the devas, whom they can see just as animals can perceive humans.

The Human realm (also known as the Manuṣya realm) is based on passion, desire, doubt, and pride.

Buddhists see this realm as human existence. A human rebirth is in fact considered to be the by far most advantageous of all possible rebirths in samsara because a human rebirth is the samsaric realm from which one can directly ensure enlightenment either in the present or future birth (for anagamis, the actual liberation occurs in a deva realm). This is because of the unique possibilities that a human rebirth offers.

A human rebirth is considered to have tremendous potential when used correctly, however we usually waste our human lifetime in materialistic pursuits, and end up reinforcing our unhelpful emotions, thoughts, and actions. Because of this, it is almost always the case that one descends to a lower rebirth after a human life, rather than immediately going on to another human birth.

In the lower realms, such as the animal realm, it is a very slow and difficult process to accumulate enough merit to achieve a human birth once again, so it may be countless lifetimes before one has another chance.

The Animal realm (also known as the Tiryag-yoni realm) is based on strong mental states of stupidity and prejudice cultivated in a previous life or lives.

Buddhists believe that this realm is the realm of existence of the nonhuman animals on Earth. Humans can however be seen by the animals, in the same way that the Asura can see the Devas.

The Hungry Ghost realm (also known as the Preta realm) is a rebirth based on strong possessiveness and desire which were cultivated in a previous life or lives.

The sentient beings in this realm are known as "hungry ghosts". They are constantly extremely hungry and thirsty, but they cannot satisfy these needs. In Tibetan versions of the Bhavacakra these beings are drawn with narrow necks and large bellies. This represents the fact that their desires torment them, but they are completely unable to satisfy themselves.

The Naraka realm, or "hell realm" is a rebirth based on strong states of hatred cultivated in a previous life or lives.

The Buddhist view of Niraya differs significantly from that of most monotheistic religions in that those being punished in this realm are not trapped permanently. An exception is Judaism which has a hell equivalent in which souls are punished and purified of their sins by fire and then continue on their journey to paradise. In Niraya the souls remain until their negative karma is used up, at which point they are reborn into another realm.

The Wheel of Life

The Bhavachakra or "Wheel of Life" is a popular teaching tool often used in the Indo-Tibetan tradition. It is a kind of diagram which portrays these realms and the mechanism that causes these samsaric rebirths. In this depiction, the realm of the Devas is shown at the top, followed clockwise by the realms of the Asuras, Animals, Naraka, the Pretas, and Humans. Close examination will show that the Buddha is shown as being present in every one of these realms.

In Mahayana and Vajrayana Buddhism, there are some sayings reflecting a tradition that the manner of a sentient being's death indicates the world in which it will be reborn.[9][10] A common one is in the Verses on the Structure of the Eight Consciousnesses (八識規矩補註),[11] reads: "to birth in saints the last body temperature in top of head, to deva in eyes, to human in heart, to hungry ghosts in belly, to animals in knee cap, to the hells-realm in sole of feet." The Tibetan Buddhist text Bardo Thodol describes further on the experiences to these realms.

"In Buddhism, both naraka (infernal states) and deva state (angelic states) have not the same sense as in other religions. In Vedic religions which preceded Buddhism, for example, these states had the same meaning as in Catholicism. Still retains this meaning to some unenlightened Buddhists and can be seen even today buddhic images that resemble the gruesome descriptions of hell and paradise. But a true understanding of Buddhism gives to these states a mood status. Especially in Zen, these states [along with the other four realms and the states of Śrāvaka, Pratyekabuddha, Bodhisattva and Buddha - the ten spiritual realms] are explained as different stages that are unfolded during the practice of zazen."

Tenzin Wangyal Rinpoche and Chögyal Namkai Norbu Rinpoche have published literature teaching a "Practice of the Six Loka" designed to "purify the karmic traces that lead to rebirth in the different realms,"[12] wherein the six lokas are also cognate with the principal six chakra system of Vajrayana.