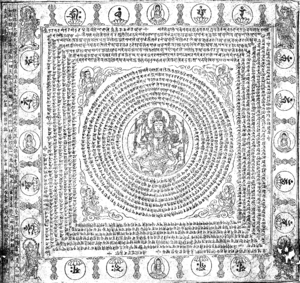 Chinese use of the Siddhaṃ script for a Sanskrit dhāraṇī. Later Tang, 927 CE

The word dhāraṇī derives from a Sanskrit root dh.r which means "to hold or maintain".[1]

Ryuichi Abe and Jan Nattier suggest that a dhāraṇī is generally understood as a mnemonic device which encapsulates the meaning of a section or chapter of a sutra.[2] Dhāraṇīs are also considered to protect the one who chants them from malign influences and calamities.

The distinction between dhāraṇī and mantra is a difficult one to make. One can say that all mantras are dhāraṇīs but all dhāraṇīs are not necessarily mantras. Mantras are generally shorter. Both tend to contain a number of phonic fragments such as Om (or Hum) that either have lesser-known meanings, or are unintelligible.

Some dhāraṇīs are found in the Pali Canon,[citation needed] but mantras are not. Dharani are the ancient Yogic Methods to be free from calamities such as dissolution of Universe. They are the most powerful. Dharani as told by Bushunda to Rishi Vasishtha that the Dharani's he uses to be immortal and be free from the dissolution of the Universe. A clear understanding of Dharani meditation reveals that the person gets free from cycles of birth and deaths forever and truly. So Dharani are meditation methods like Parvati Dharani, Varuni Dharani, Vayu Dharani etc. are all powerful ways to beget the ill effects of dissolution.

The Japanese Buddhist monk Kūkai drew a distinction between dhāraṇī and mantra and used it as the basis of his theory of language. Kūkai claims that mantra is restricted to esoteric Buddhist practice whereas dhāraṇī is found in both esoteric and exoteric ritual.

Kūkai classified mantras as a special class of dhāraṇīs and argued that every syllable of a dhāraṇī was a manifestation of the true nature of reality – in Buddhist terms, that all sound is a manifestation of śūnyatā or emptiness of self-nature. Thus, rather than being devoid of meaning, Kūkai suggests that dhāraṇīs are in fact saturated with meaning – every syllable is symbolic on multiple levels.

According to Red Pine, mantra and dharani were originally interchangeable, but at some point dhāraṇī came to be used for meaningful, intelligible phrases, and mantra for syllabic formulae which are not meant to be understood.[3] Jan Nattier writes that, whereas mantra has ancient Hindu usage back to the Vedas, dhāraṇī does not predate Buddhism.[4]