From Encyclopedia of Buddhism
(Redirected from Dharma (Buddhism))
Jump to: navigation, search

Dharma (Sanskrit) or Dhamma (Pali) in Buddhism can have the following meanings:

Dharma is a Sanskrit word, and the derived Prakrit word is Dhamma.[3]

Etymologically, the word Dhamma is derived from the root "dham," meaning "to uphold" and "to support," and the commentary further explains that it is that which upholds or supports the practitioner (of Dhamma) and prevents him or her from falling into states of misery or birth in a woeful existence. Of all Buddhist terminology, the word Dhamma commands the widest, most comprehensive meaning.[4] Dharma is to cultivate the knowledge and practice of laws and principles that hold together the fabric of reality, natural phenomena and personality of human beings in dynamic interdependence and harmony.

In Uyghur, Mongolian, and some other Central Asian languages, it is nom, which derives from the Ancient Greek word νόμος, nómos, meaning "law".[5]

Religion (a conceptual domain which in Europe has only been considered a discrete entity since the Age of Enlightenment[6]) is part of the concept of dharma within traditional Indian Civilization. Dharma means the Law (see article dharma) as well as life that is lived in accordance with the law (whether legal statutes or natural law). Dharma in this latter sense is 'the path of righteousness', the way of 'correct', 'appropriate', 'decent', or 'proper' behaviour. The different religious traditions of India are conceived as so many variations of what is considered a life of purity and goodness. Therefore a Jain practices Jain-dharma; a Hindu follows Sanatana-dharma; and a Buddhist practices Buddha-dharma. However, these designations should not be taken to imply sectarianism.[7] Historically, the Indian mindset has been characterized by religious pluralism and inclusivity.[8] All religion is considered a matter of eternally valid laws of nature (sanatana dharma) because suffering and bondage and the path to freedom and liberation is conceived (even if one believes in a personal God) in terms of causes and effects. Dharma (as the perennially fixed set of natural laws governing causation) presents the structure of rules which if understood correctly leads to natural or skillful action (dharma or kusala kamma) or if not understood and contravened leads to unskillful action (adharma or akusala kamma) with unfortunate consequences. It is the persistence of the laws of nature (and the principle of causation) from day to day, from year to year and across the vastness of time that enables one to conceive dharma as eternal. Wholesome, fair-minded actions always bring forth positive future results whereas unwholesome and unjust actions lead to suffering, misery and future retribution.[9]

Though each path of dharma (Jain, Buddhist, Hindu, etc.) signifies a particular religious form with its own rules and practices there is nonetheless general uniformity among these traditions concerning the underlying philosophy of liberation. To walk the path to liberation is to unravel and reorganize the entangled and disharmonious psycho-physical structures formed in the course of the path of unskillful action[10] and the principal means by which this is achieved is Yoga, a central feature of Indian religions. Yoga is the ascetic path of purification by which the effects of sin (akusla kamma) may be undone. Most forms of Indian religion employ some form of yogic discipline as an important, if not central, tool in the process of mind-body purification.

Buddhism (a word invented by British scholars and Christian missionaries at the beginning of the nineteenth century) is referred to in the East as Buddha-dharma or Dharma vinaya. This refers to both the system of analysis taught by the Buddha (recorded in the sutta pitaka of the Pali canon) regarding the causes of suffering (Pali: pariyatti) and the necessary course of action needed to be taken to undo these causes (Pali: patipatti). This course of action involves leading a life of moral uprightness abstaining from unwholesome behaviours and engaging in wholesome ones. Such a lifestyle as well as keeping a person out of harm's way brings about over time a purification of any taints brought about by unskilful past activities. Buddhism is thus often referred to as "the path of purification" (Pali: Visuddhimagga) and within a Western context can be seen as an applied system of natural mental health and well-being. As with other Indian religions, the end point of this path (notwithstanding the commitment to helping others to achieve the same), the final undoing of all the internal causes of suffering, is final liberation or Moksha. This is accompanied by a profound peace of mind referred to as nirvana.

Dhamma-vinaya; the Buddha's Path of Practice

Gautama Buddha referred to the path that he prescribed his students as dhamma-vinaya (dhamma is the conventional rendering of the Pali word into Roman script compared to Sanskrit which is rendered as dharma) which means this path of discipline (vinaya means discipline). The path of the Buddhas (Gautama Buddha saw himself as one in a long line of Buddhas stretching back into remote antiquity) is a path of self-imposed discipline. This discipline involves refraining as much as possible from sexual activity (this is called Brahmacarya), a code of ethical behaviour (Śīla) and effort in the cultivation of mindfulness and wisdom. (See also Threefold Training)

In the Buddhist Scriptures, the expression "The Dharma" often refers to the Buddha's teachings and their scriptural recension (e.g. the Vinaya and Sutta Pitaka of the Pali Canon), and can more broadly include the later traditions of interpretation and exegesis that the various schools of Buddhism have developed to help explain and expand upon the Buddha's teachings. In later Mahayana tradition, this was seen as the 84,000 different teachings (the Kangyur/bka.'gyur) that the Buddha gave to various types of people based on their needs.

In this sense of being synonymous with the Buddha's teachings the Dharma constitutes one of the Three Jewels of Buddhism in which practitioners of Buddhism take refuge (what one relies on for his/her lasting happiness). The three jewels of Buddhism are the Buddha (mind's perfection of enlightenment), the Dharma (teachings and methods), and the Sangha (the community of committed practitioners of the buddha dharma who provide mutual support, encouragement and spiritual friendship).

The cultivation and attainment of wisdom is part of the goal and practice of Buddhism. In order to attain wisdom one must understand the nature of things (the dharma), and part of the practice of Buddhism is the investigation of Nature - dhamma-vicaya. This means to adopt an objective, systematic approach to understanding the causal relationships between various phenomena. In particular, it refers to the dispassionate self-observation discussed in teachings such as the Satipatthana Sutta. The principal teaching from this analysis is the doctrine of dependent origination.

In another reference from the Aggañña Sutta,[12] the Buddha says to his disciple Vasettha:

The Teaching of the Buddha has six supreme qualities:

Knowing these attributes, Buddhists believe that they will attain the greatest peace and happiness through the practice of the Dhamma. Therefore, each person is fully responsible for his or her self to put it into practice for real.

Here the Buddha is compared to an experienced and skillful doctor, and the Dhamma to proper medicine. However efficient the doctor or wonderful the medicine may be, the patients cannot be cured unless they take the medicine properly. So the practice of the Dhamma is the only way to attain the final deliverance of Nibbāna.

Other uses include dharma, normally spelled in transliteration with a small "d" (this differentiation is impossible in the South Asian scripts used to write Sanskrit), which refers to a phenomenon or constituent factor of human experience. This was gradually expanded into a classification of constituents of the entire material and mental world. Rejecting the substantial existence of permanent entities which are qualified by possibly changing qualities, Buddhist Abhidharma philosophy, which enumerated seventy-five dharmas, came to propound that these "constituent factors" are the only type of entity that truly exists. This notion is of particular importance for the analysis of human experience: Rather than assuming that mental states inhere in a cognizing subject, or a soul-substance, Buddhist philosophers largely propose that mental states alone exist as "momentary elements of consciousness", and that a subjective perceiver is assumed.

One of the central tenets of Buddhism, is the denial of a separate permanent "I", and is outlined in the three marks of existence. The three signs: 1. Duḥkha (Pali: Dukkha) - Suffering, 2. Anitya (Pali: Anicca) - Change/Impermanence, 3. Anātman (Pali: Anatta) - Non-self. At the heart of Buddhism, is the realization of no "self" or "I" (and hence the delusion) as a separate self-existing entity.

Later, Buddhist philosophers like Nāgārjuna would question whether the dharmas (momentary elements of consciousness) truly have a separate existence of their own. (i.e. Do they exist apart from anything else?) Rejecting any inherent reality to the dharmas, he asked (rhetorically):

There is no dharma whatsoever taught by the Buddha to whomever, whenever, wherever.
— Mūlamadhyamakakārikā, nirvṇānaparīkṣā, 25:22–24 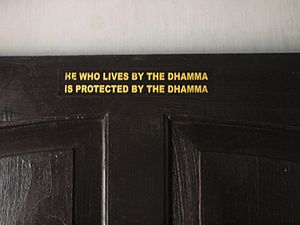 Dharma in the Buddhist scriptures has a variety of meanings, including "phenomenon", and "nature" or "characteristic".

Dharma can mean the source of all mental experiences. In major sutras (for example, the Mahasatipatthana sutra), Dharma is paired with citta (heart/mind) to show citta as the reflection of Dharma. This teaching is paralleled with the pairing of kaya (body) and vedana (feelings or sensations), where vedana arise within the body but are experienced through the mind. Dharma in this context is the origin of order and organization that is the foundation of ideas, wisdom, understanding, and values.[15]

Dharma is also used to refer to the teachings of Buddha, not in the context of the words of one man, even an enlightened man, but as a reflection of natural law which was re-discovered by this man and shared with the world. A person who lives their life with an understanding of this natural law, is a "dhammic" person, which is often translated as "righteous". The Buddha would teach the Four Noble Truths, the Noble Eightfold Path, the Three marks of existence, and other guidelines in order to achieve the freedom and liberation from suffering.

Comparison to dharma in other Indian religions

According to David Kalupahana, dharma in Buddhism is also the term for "phenomena".[16] Kalupahana states Buddha defined this dharma as "dependently arisen phenomena" (paticca-samuppanna-dhamma), thus distinguishing the notion of dhamma from the Indian conception where the term dharma meant reality (atman), in an ontological sense, while the Buddha utilized the conception of result or consequence or fruit (attha, Sk. artha) to bring out the pragmatic meaning of dhamma. However, other scholars have questioned Kalupahana's analysis.[17]