From Encyclopedia of Buddhism
(Redirected from Dharmacakra)
Jump to: navigation, search 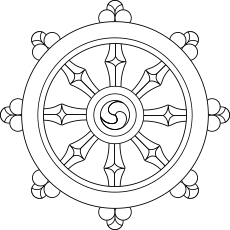 The Dharmachakra sybolizes the teachings of the Buddha.

The dharmachakra (Skt. dharmacakra; P. dhammacakka; T. chos kyi ’khor lo; C. falun; J. hōrin; K. pŏmnyun 法輪), or wheel of dharma, is an eight-spoked wheel that traditionally represents the teachings of the Buddha. Each spoke of the wheel symbolizes a branch of the noble eightfold path.[1]

The dharmachakra is one of the earliest symbols of the Buddha's teachings. It has represented the Buddhist dharma since the time of early Buddhism.[2]

It is one of the eight auspicious symbols in Buddhism.[3][4] 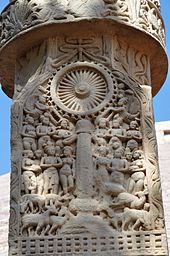 A dharmachakra symbol (with 24 spokes) on a pillar.

The Dharmachakra is one of the oldest known Buddhist symbols found in Indian art, appearing with the first surviving post-Indus Valley Civilization Indian iconography in the time of the Buddhist king Ashoka.[2][note 1]

The Buddha is said to have set the dharmachakra in motion when he delivered his first sermon,[5] which is recorded in the Dhammacakkappavattana Sutta. The eight spokes of the wheel represent the Noble Eightfold Path, which the Buddha presented in this sermon.

In Indian mythology, the term chakravartin, or "wheel-turner", was used to described a universal king or monarch.[5][6] The chakravatartin was said to possess "a magical wheel that rolled around the world, bringing the land's it entered under the king's domain."[7] Buddhism adopted the wheel symbol to represent the teachings of the Buddha; teaching the Buddha-dharma is referred to as "turning the wheel of the dharma."

One aspect of the dharmachakra is that it has the ability to cut through all obstacles and illusions.[6]

Ten Indus glyphs from the northern gate of Dholavira.

The wheel is also the main attribute of Vishnu, the Vedic god.[6] Madhavan and Parpola note that the Chakra sign appears frequently in Indus Valley civilization , on several seals.[8] Notably, in a sequence of ten signs on the Dholavira signboard, four are the chakra.[9]