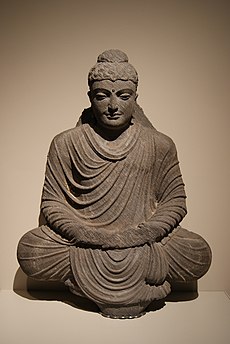 When referring to higher states of mind, meditative absorption (dhyāna) is classified into two broad types:[1]

Each of these types of meditative absorption is divided into four stages, giving a total of eight stages of absorption. However, it is the first set of four stages ("the four dhyānas") that are the main concern for Buddhist meditation manuals and practitioners. The second set of four stages (of the formless realm) "are not useful for cultivating wisdom because the mind is too absorbed."[4]

Accessing the stages of meditative absorption

The stages of meditative absorption (dhyāna) are accessed through the development of shamatha meditation.

Science and Philosophy in the Indian Buddhist Classics (Vol 2) states:

Buddhist texts distinguish among many categories of “gross” and “subtle” states of mind. They speak of how one can go beyond the gross states of mind of the desire realm and attain higher states of mind, such as the states of mind encompassing the meditative absorption (dhyāna) of the form and formless realms. Achieving these higher states mainly arises through attaining a single-pointed mind focused on one’s chosen meditation object in dependence on a method that combines mindfulness and meta-awareness. Ultimately this depends on achieving calm abiding (shamatha), where the mind remains single-pointedly focused.[3]

Specifically, the first stage of absorption arises when, through the practice of shamatha, the five hindrances are overcome and the five absorption factors (dhyānāṅga) are present.

The overcoming of the five hindrances and the coming into balance of these five limbs of dhyāna (dhyānāṅga) is, according to the later manuals, equivalent to the mind becoming settled in ‘access’ concentration, a state of mind on the threshold of dhyāna. The manuals describe the stages leading to access concentration in two different ways (see Table 5). In effect, Upatissa and Buddhaghosa give an account in terms of three successive mental images or ‘signs’ (nimitta) and five stages of joy (pīti), while Asaṅga and Vasubandhu, the fathers of the Yogācāra tradition of Mahāyāna thought, detail nine stages of the settling of the mind (citta-sthiti), although they too make reference to the mental images (pratibimba) seen in meditation.[2]

In access concentration, the [absorption factors] are still weak, like the legs of a toddler learning to walk. Once they are strong, the mind may briefly dip into or remain in a state of ‘absorption (appanā)-concentration’, when [dhyāna], ‘meditation’ proper, is attained.[5]

Meditative absorption of the form realm (the four dyānas)

These stages are distinguished by identifying which of the five absorption factors (dhyānāṅga) are present at each stage.

The initial attainment of meditative absorption or dhyāna is characterized by the presence and balancing of five mental qualities, the limbs of dhyāna (dhyānāṅga). But this initial attainment can be further refined. The process of refinement seems once again best understood by reference to some such process as that of learning to play a musical instrument. In the initial stage of competence the mind will still have to pay attention in the way described above: it will have to think consciously what to do. However, as one’s facility develops the process will become increasingly automatic and unconscious—that is, the concert pianist does not have to think consciously where to put his hands or how to place her fingers, she just does it; nevertheless he is still fully aware of what he is doing. In much the same way, it seems, the meditator becomes able to attain states of concentration by simply adverting to the object of meditation. Attaining to states of concentration in this way without ‘application of thought’ (vitakka) or ‘examining’ (vicāra) is the characteristic of the second dhyāna, which thus has only three remaining limbs of dhyāna: joy (pīti), happiness (sukha), and one-pointedness of mind (ekaggatā). From here the state of concentration can be further refined. Joy is experienced as something that in itself can disturb the mind. With the subsiding of joy one attains the third dhyāna. In a similar manner the meditator eventually lets go of happiness too, and finally attains the fourth dhyāna, a state of purified equanimity and balance.[2]

Attaining the fourth dhyāna is a significant milestone in the Buddhist path. Gethin states:

Meditative absorption of the formless realm

These stages are considered to be refinements of the fourth dhyāna of the form realm.[2]

The four stages are:

The practice of dhyāna

The term dhyāna is also used in the sense of "to practice dhyāna," meaning to engage in the practice that leads the states of meditative absorption (dhyāna).

In the Sanskrit tradition, the perfection of meditative stability (dhyāna-pāramitā) is identified as one of the six or ten paramitas.

One Teacher, Many Traditions states:

The perfection of meditative stability involves developing concentration through the nine stages of sustained attention... While bodhisattvas renounce the pursuit of sense pleasures to develop the eight meditative absorptions, these are not their main interest. Their ultimate aim is to use their concentration to develop the insight focused on emptiness and then use that to cut the root of saṃsāra and eliminate the two obscurations.[6]

The term dhyāna has been translated into English as follows: