He was born in the Denhok Valley at Kham Derge, Eastern Tibet in 1910 to a family directly descended from the ninth century King Trisong Detsen. His father was a minister to the King of Derge. When he was seven years old, he was publicly recognized as one of the reincarnations of Jamyang Khyentse Wangpo by Shechen Gyaltsap Rinpoche (1871–1926) at Shechen, one of the six principal monasteries of the Nyingmapa school. During the next few years Dilgo Khyentse received full schooling from various tutors, in addition to training in meditation, and in the study of the Dharma in general, and of Tantra specifically.

His root Guru was Shechen Gyaltsap Rinpoche, and Dzongsar Khyentse Chokyi Lodro (1893–1959) was his other main spiritual master. After he completed what is known as the Preliminary Practices (Ngöndro), Khyentse Rinpoche spent most of the next thirteen years in silent retreat in remote hermitages and caves near his birthplace.

After completing his retreat at the age of twenty-eight, Khyentse Rinpoche spent many years with Dzongsar Khyentse Chokyi Lodro. After receiving from Khyentse Chokyi Lodro the many empowerments of the Rinchen Terdzo (the collection of Revealed Treasures or termas), Dilgo Khyentse requested to spend the rest of his life in solitary meditation. But Khyentse Chokyi Lodro's answer was: "The time has come for you to teach and transmit to others the countless precious teachings you have received."

Additionally he received teachings at Palpung Monastery from the eleventh Tai Situ Rinpoche, and full instruction on the ancient Guhyagarbha Tantra and its various commentaries from Khenpo Tubga at Kyangma Ri-tro. In all he studied with over fifty great teachers from all the various oral and practice lineages of Tibetan Buddhism.[3]

Later on, the Dalai Lama regarded Dilgo Khyentse Rinpoche as his principal teacher in the Nyingma tradition and of Dzogchen. Khyentse Rinpoche was also one of the main teachers of Chögyam Trungpa, whom he held in high regard.

In the 1950s, as rebellions broke out in Kham in response to the imposition of Chinese Communist rule, Khyentse Rinpoche and his family escaped to central Tibet, leaving behind his library of collected Dharma books and most of his own writings. Then in 1959, after the 14th Dalai Lama left Tibet, Khyentse Rinpoche, his family and a few disciples left Tibet, including his brother the 9th Sangye Nyenpa Rinpoche and Tenga Rinpoche,[4] and headed for Bhutan. The royal family of Bhutan invited him to stay there and teach.

Later, as he made frequent visits to give teachings to the 14th Dalai Lama at Dharamasala in India, he began giving teachings all over the Himalayas, India, Southeast Asia and the West. He also engaged in scholarship and composed numerous poems, meditation texts and commentaries. He was also a Terton (a discoverer of spiritual treasures) and was considered to have discovered numerous termas. He was one of the leading masters of the pith-instructions of Dzogchen, the Great Perfection, and one of the principal holders of the Longchen Nyingtik tradition.

In 1980, he founded the Shechen Tennyi Dargyeling Monastery in Nepal, where he transplanted the Shechen tradition to a new home near the great stupa of Boudhanath, just northeast of Kathmandu. At this location over the years he gave many teachings, turning the wheel of the Dharma countless times for hundreds of other lamas, disciples, and students from around the world. Over this same time period, and up until his paranirvana in 1991, Dilgo Khyentse Rinpoche was involved in publishing as much of Tibet’s extraordinary heritage of Buddhist teachings as possible, over three hundred volumes altogether.

He was one of the few Tibetan Lamas accorded the honorific title of "His Holiness". Following the death of Dudjom Rinpoche in 1987, he became the head of the Nyingma School, and remained so until his death in Bhutan on 28 September 1991.

Final cremation ceremonies were held for him over a three-day period near Paro in Bhutan, in November 1992 and were attended by over a hundred important lamas, the Royal Family and ministers of Bhutan, five hundred western disciples and some fifty thousand devotees.

With respect to oral transmission, even if the lineage is impure, it is not a problem. Dilgo Khyentse Rinpoche often sought out and received any oral transmission he thought was on the verge of disappearing. It made no difference who was giving it. He would receive it and, in turn, pass it on to make sure that the lineage remained unbroken.[6] 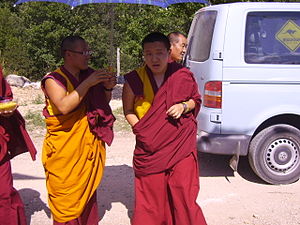 Khyentse Yangsi Rinpoche was born in Nepal on June 30, 1993. When Khyentse Rinpoche passed away, his close students requested Trulshik Rinpoche, his most senior and accomplished disciple, to find his incarnation.[7]

The film "Spirit of Tibet: Journey to Enlightenment, The Life and World of Dilgo Khyentse Rinpoche" was released in 1998. It was made by Matthieu Ricard (French photographer, Buddhist monk, and author) who had travelled with Khyentse Rinpoche for 14 years. It tells Khyentse Rinpoche's story from birth to death, to rebirth, and of his escape following China's invasion of Tibet to his determination to preserve and transmit Buddhist teachings far and wide. The film reveals Tibet's art, ritual philosophy, and sacred dance. Along with rarely photographed areas of Tibet, Bhutan and Nepal, this film features interviews with the Dalai Lama, who speaks about his own spiritual life.

Another film was "Brilliant Moon: Glimpses of Dilgo Khyentse Rinpoche", written and directed by Neten Chokling, and narrated by Richard Gere and Lou Reed. Brilliant Moon uses animation, previously unseen archival footage and photos along with new interviews of Tibet's great teachers, to tell Khyentse Rinpoche's life story, from birth to death to his rebirth.