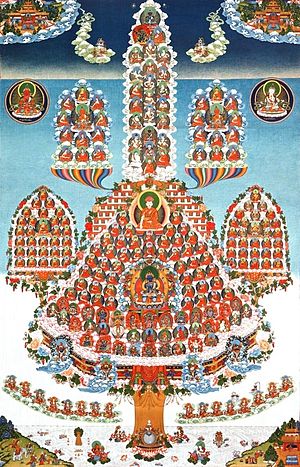 The Drikung Kagyü school is present today in Tibet, India and Ladakh, and unites both the major Kagyü and Nyingma traditions. This school is famous for its specific phowa practice.[1] 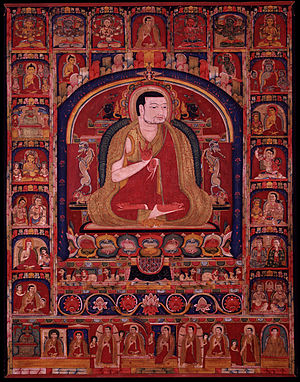 Phagmodrupa with His Previous Incarnations and Episodes from His Life, 14th-century painting from the Rubin Museum of Art

The unique doctrines of Drikung Kagyu as taught by its founder, Jigten Sumgön is preserved in "The Single Intention" or "One thought of Drikung" (Drikung Gonchik, Wylie: dgongs gcig)[3] and "The Essence of Mahāyāna Teachings" (Wylie: theg chen bstan pa'i snying po). According to Jampa MacKenzie Stewart, the Gonchik "recasts Buddhism in a fascinating and innovative form, emphasizing each aspect as being capable of revealing the full process of enlightenment."[4]

The main practices of Drikung Kagyu are “The Five-fold Profound Path of Mahamudrā,” and “The Six Dharmas of Nāropa.” The five-fold Mahamudrā, also known as the "possessing five", consists of five elements:[5]

This practice is traditionally cultivated in retreat alongside the Six Dharmas of Naropa, and it is preceded by the preliminary practices called ngondro.[6]

This presentation is outlined in Clarifying the Jewel Rosary of the Profound Five-Fold Path by Kunga Rinchen, the Dharma heir to Jigten Sumgön.

The Drikung Kagyu also have a tradition of Dzogchen teachings, the Yangzab Dzogchen.[7] It is based on termas revealed by the Drikung Tertön (hidden treasure revealer), Rinchen Phuntsog in the sixteenth century.

The Drikung lineage is popularly known for its development of the practice of Phowa, in which a practitioner learns how to expel his/her consciousness or mindstream through the posterior fontanelle at the top of the skull at the moment of death. One of the Six Yogas of Naropa, this practice is said to aid the practitioner in remaining aware through the death experience, thus aiding one in attaining enlightenment in the Bardo (the state in between death and the next rebirth) or in achieving a birth conducive to the practice of Dharma. 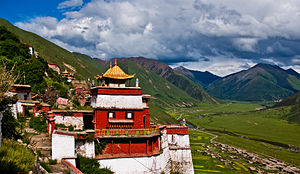 Aside from the Drikung Valley in Ü, the Drikung Kagyu has a strong presence in Nangqên County in what was Kham, in western Tibet (including Kailash), and in Ladakh. Tsari and Lapchi - two important sacred sites for all Tibetan Buddhists - also have a strong Drikung Kagyu presence. Among the so-called "four major and eight minor" Kagyu lineages, Drikung Kagyu is one of four Kagyu lineages that continue to exist as independent institutions (the other three being the Karma Kagyu, Drukpa Lineage and Taklung Kagyu).

Outside of Tibet, the headquarters for the tradition in exile is Jangchubling, located in Dhera Dun, in the Indian state of Uttarakhand.[9]

Drikung Kagyu is one of the most prominent lineages in Ladakh where its main monasteries are Phyang and Lamayuru, with roughly 50 other monasteries spread across Ladakh region.

A series of Drikung Dharma centers were also founded in the West, a project begun by Drikung Kyabgon Chetsang Rinpoche in 1978.[10]