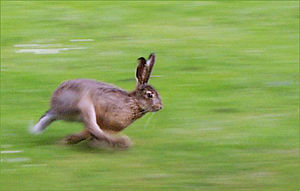 This is one of the Jataka tales or tales of a previous life of the Buddha, as retold by Ken & Visakha Kawasaki[1]. For others see the List of Jatakas. This is a very early version of the story now known as "Henny Penny" or as "Chicken Little" in the US. The authors of this retelling give permission to publish it according to their #License.

There is an audio recording of it here: The Sound the Hare Heard Duddubha Jataka by the Buddhist Relief Mission.

One morning while some bhikkhus were on their alms round in Savatthi, they passed some ascetics of different sects practicing austerities. Some of them were naked and lying on thorns. Others sat around a blazing fire under the burning sun.

Later, while the monks were discussing the ascetics, they asked the Buddha, "Lord, is there any virtue in those harsh ascetic practices?"

The Buddha answered, "No, monks, there is neither virtue nor any special merit in them. When they are examined and tested, they are like a path over a dunghill, or like the noise the hare heard."

Puzzled, the monks said, "Lord, we do not know about that noise. Please tell us what it was."

At their request the Buddha told them this story of the distant past.

Long, long ago, when Brahmadatta was reigning in Baranasi, the Bodhisatta was born as a lion in a forest near the Western Ocean. In one part of that forest there was a grove of palms mixed with belli trees.[2] A hare lived in that grove beneath a palm sapling at the foot of a belli tree.

One day the hare lay under the young palm tree, idly thinking, "If this earth were destroyed, what would become of me?" At that very instant a ripe belli fruit happened to fall and hit a palm leaf making a loud "THUD!"

Startled by this sound, the hare leapt to his feet and cried, "The earth is collapsing!" He immediately fled, without even glancing back.

Another hare, seeing him race past as if for his very life, asked, "What's wrong?" and started running, too.

"Don't ask!" panted the first. This frightened the second hare even more, and he sprinted to keep up.

Pausing for just a moment, the first hare cried, "The earth is breaking up!" At this, the two of them bolted off together.

Their fear was infectious, and other hares joined them until all the hares in that forest were fleeing together. When other animals saw the commotion and asked what was wrong, they were breathlessly told, "The earth is breaking up!" and they too began running for their lives. In this way, the hares were soon joined by herds of deer, boars, elk, buffaloes, wild oxen, and rhinoceroses, a family of tigers, and some elephants.

When the lion saw this headlong stampede of animals and heard the cause of their flight, he thought, "The earth is certainly not coming to an end. There must have been some sound which they misunderstood. If I don't act quickly they will be killed. I must save them!"

Then, as fast as only he could run, he got in front of them, and roared three times. At the sound of his mighty voice, all the animals stopped in their tracks. Panting, they huddled together in fear. The lion approached and asked why they were running away.

"The earth is collapsing," they all answered.

"Who saw it collapsing?" he asked.

"The elephants know all about it," some animals replied.

When he asked the elephants, they said, "We don't know. The tigers know."

When he asked the hares, they pointed to one particular hare and said, "This one told us."

The lion asked him, "Is it true, sir, that the earth is breaking up?"

"Where were you when you saw it?"

"In the forest in a palm grove mixed with belli trees. I was lying there under a palm at the foot of a belli tree, thinking, 'If this earth were destroyed, what would become of me?' At that very moment I heard the sound of the earth breaking up and I fled."

From this explanation, the lion realized exactly what had really happened, but he wanted to verify his conclusions and demonstrate the truth to the other animals. He gently calmed the animals and said, "I will take the hare and go to find out whether or not the earth is coming to an end where he says it is. Until we return, stay here."

Placing the hare on his tawny back, he raced with great speed back to that grove. Then he put the hare down and said, "Come, show me the place you meant."

The hare, shivering in fear, would not risk going near the belli tree. He could only point and say, "Over there, sir, is the place of dreadful sound."

The lion went to the place the hare indicated. He could make out where the hare had been lying in the grass, and he saw the ripe belli fruit that had fallen on the palm leaf. Having carefully ascertained that the earth was not breaking up, he placed the hare on his back again and returned to the waiting animals.

He told them what he had found and said, "Don't be afraid." Reassured, all the animals returned to their usual places and resumed their routines.

Those animals had placed themselves in great danger because they listened to rumours and unfounded fears rather than trying to find out the truth themselves. Truly, if it had not been for the lion, those beasts would have rushed into the sea and perished. It was only because of the Bodhisatta's wisdom and compassion that they escaped death.

At the conclusion of the story, the Buddha identified the Birth: "At that time, I myself was the lion."

Introduction to the series

The Jataka, one of the books in the Khuddaka Nikaya, contains 550 stories the Buddha told of his previous lifetimes as an aspiring Bodhisatta. The Jataka stories are classic Buddhist morality tales, often witty, and filled with a host of colorful characters: clever monkeys, wise elephants, brave princes, wicked ogres, and the occasional benign tree spirit. Although they have sometimes been compared to the West's Grimms' fairy tales, they are not simply amusing diversions from "serious" Dhamma literature. Unlike Grimms', whose moral lessons are often ambiguous and occasionally even downright sinister, the Jataka tales are replete with important lessons woven from the unmistakable threads of heightened virtue and liberating wisdom, twin hallmarks of the Buddha's legacy of transcendent freedom.

In this series the authors have breathed new life into Cowell's classic compilation[3] of 19th c. translations of the Jataka by adapting them into lively English for a contemporary audience. The clarity of the retellings, coupled with the authors' selection of the stories themselves, makes this series a valuable introduction to this important body of Theravada canonical literature. These retellings will appeal not only to experienced students of Buddhism, but also to parents looking for engaging stories of upright morality to share with an inquisitive young child.

You may copy, reformat, reprint, republish, and redistribute this work in any medium whatsoever, provided that: (1) you only make such copies, etc. available free of charge and, in the case of reprinting, only in quantities of no more than 50 copies; (2) you clearly indicate that any derivatives of this work (including translations) are derived from this source document; and (3) you include the full text of this license in any copies or derivatives of this work. Otherwise, all rights reserved. Documents linked from this page may be subject to other restrictions. Bodhi Leaves No. 142 (Kandy: Buddhist Publication Society, 1997). Transcribed from a file provided by the BPS. Last revised for Access to Insight on 30 November 2013.