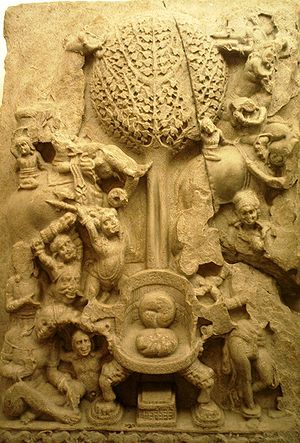 The empty throne is a symbol that was used in early Buddhist art, often depicted under a parasol or Bodhi Tree. This was, in the traditional view, an aniconic symbol for the Buddha; they avoided depicting the Buddha in human form, like early Christians with God the Father. Alternatively, it has been argued that these images represent actual relic-thrones at the major pilgrimage sites which were objects of worship.[2] The throne often contains a symbol such as the dharma wheel or Buddha footprint, as well as a cushion.

The "empty throne" had a pre-Buddhist history. An Assyrian relief in Berlin of c. 1243 BCE shows King Tukulti-Ninurta I kneeling before the empty throne of the fire-god Nusku, occupied by what appears to be a flame.[3] The Hittites put thrones in important shrines for the spirit of the dead person to occupy, and the Etruscans left an empty seat at the head of the table at religious feasts for the god to join the company.[4] A throne with a crown upon it had been a symbol for an absent monarch in Ancient Greek culture since at least the time of Alexander the Great,[5] whose deification allowed secular use for what had previously been a symbol for Zeus, where the attribute placed on the throne was a pair of zig-zag thunderbolts.[6]