Deprecated: The each() function is deprecated. This message will be suppressed on further calls in /home/customer/www/encyclopediaofbuddhism.org/public_html/includes/MagicWordArray.php on line 206
 Ensō - Encyclopedia of Buddhism

From Encyclopedia of Buddhism
Jump to: navigation, search
For other uses, see Enso (disambiguation). 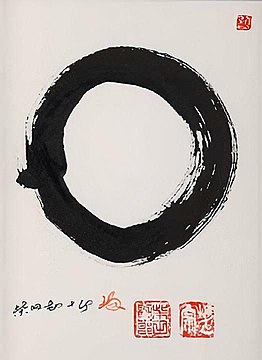 Ensō (c. 2000) by Kanjuro Shibata XX. Some artists draw ensō with an opening in the circle, while others close the circle.

In Zen, ensō (円相, , "circle") is a circle that is hand-drawn in one or two uninhibited brushstrokes to express a moment when the mind is free to let the body create.

The ensō symbolizes absolute enlightenment, strength, elegance, the universe, and mu (the void). It is characterised by a minimalism born of Japanese aesthetics.

Drawing ensō is a disciplined-creative practice of Japanese ink painting—sumi-e (墨絵, "ink painting"). The tools and mechanics of drawing the ensō are the same as those used in traditional Japanese calligraphy: One uses a brush (筆, fude) to apply ink to washi (a thin Japanese paper).

The circle may be open or closed. In the former case, the circle is incomplete, allowing for movement and development as well as the perfection of all things. Zen practitioners relate the idea to wabi-sabi, the beauty of imperfection. When the circle is closed, it represents perfection, akin to Plato's perfect form (Plato), the reason why the circle was used for centuries in the construction of cosmological models, see Ptolemy.

Usually, a person draws the ensō in one fluid, expressive stroke. When drawn according to the sōsho (草書) style of Japanese calligraphy, the brushstroke is especially swift. Once the ensō is drawn, one does not change it. It evidences the character of its creator and the context of its creation in a brief, continuous period of time. Drawing ensō is a spiritual practice that one might perform as often as once per day.[1]

Use outside of Zen Buddhism

In 1995, Lucent Technologies hired the San Francisco office of Landor Associates, a transnational brand consultancy, to design their brand image.[2] In the design of the logo, Landor colored an image of an ensō red. The designer intended the brushstroke to imply human creativity, and the red to convey urgency.[3] They named it the "Innovation Ring". "Our name and symbol represent the new entrepreneurial spirit and vision of our company" reads a public relations statement from Lucent.[4] In North America, the logo was widely misunderstood.[2][3] After years of staying-power and familiarity, the logo became more accepted by industry people in the West (including Lucent's own employees), although it was still not well understood. Nonetheless, soon other logo designers began to be influenced by the work.[3] Lucent stopped using the logo after merging with Alcatel of France to form Alcatel-Lucent.

A variation of the symbol was also used as a logo by Obaku Ltd.. They continue to use an ensō shape as a wristwatch brand.

Thinking, an international design and consulting house centred in London, uses an ensō[5] meaning "Expression" as one of their four icons, along with icons for science, pattern and vision.

Philosopher Joseph Campbell's book, The Hero with a Thousand Faces, bears this symbol on its cover representing creativity and uninhibited freedom of expression within art/literature.

The book The Lean Startup uses an enso on the cover. One of the concepts in the approach includes a learning cycle 'Build - Measure - Learn".

The design of Apple Campus 2, Apple Inc.'s ring-shaped corporate headquarters, might also have been inspired by the ensō.[6]

AMD uses an ensō in the marketing of its Ryzen processors with the Zen microarchitecture.

MINDBODY prominently features an ensō in its company logo.