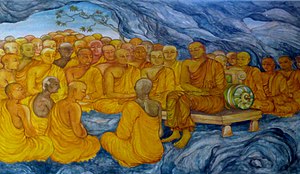 First Council at Rajagaha, painting at the Nava Jetavana, Shravasti

Buddhist council [refers to] any of several assemblies convened in the centuries following the death of the Buddha to recite approved texts of scriptures and to settle doctrinal disputes. Little reliable evidence of the historicity of the councils exists, and not all councils are recognized by all the traditions; on occasion they resulted in schisms within the Buddhist community.

The first council, held at Rājagṛha (modern Rājgīr, Bihār state, India), is said to have taken place during the first rainy season following the Buddha’s death. Compilations were made of the Buddha’s rules of vinaya (monastic discipline), under the direction of the elder Upāli, and of the sutras (instructive aphorisms), under the direction of the disciple Ānanda. The entire assembly of 500 monks then recited the approved texts. Many scholars deny that the Council of Rājagṛha took place.[3]

According to late commentarial accounts, King Ajātasattu sponsored the council. Tradition holds that on the full moon day of Shravan lunar month the Council was held in a hall erected by Ajātasattu outside Saptaparni Cave in Rajgir, three months after Gautama Buddha had died. Detailed accounts of the council can be found in the Khandhaka sections of the canonical Vinayas. Other sources state that the Buddha died 218 years before the coronation of Asoka in 269 BCE, so by this definition, the Buddha died in 483 BCE, which matches the reign of Ajātasattu.

According to this record, the incident which prompted Mahākassapa to call this meeting was his hearing a disparaging remark about the strict rule of life for monks. The monk Subhadda, who had ordained late in life, upon hearing that the Buddha had expired, voiced his resentment at having to abide by all the rules for monks laid down by the Buddha. Many monks lamented the passing of the Buddha and were deeply grieved but Subhadda spoke up to show happiness and relief that Buddha was gone.

And Subhadda, the late-received one, said to the Bhikkhus: "Enough, Sirs! Weep not, neither lament! We are well rid of the great Samana. We used to be annoyed by being told, 'This beseems you, this beseems you not.' But now we shall be able to do whatever we like; and what we do not like, that we shall not have to do."[4]

Mahakassapa was alarmed by his remark and feared that the dhamma and Vinaya might be corrupted and not survive intact if other monks were to behave like Subhadda and interpret the Dhamma and the Vinaya rules as they pleased. To avoid this he decided that the Dhamma must be preserved and protected. To this end after gaining the Sangha's approval he called to council five hundred Arahants.[4] Ananda was to be included in this provided he attained the state of the arahant by the time the council convened.[5]

The Saptaparni Cave in Rajgir, where the First Buddhist Council may have been held.

With the Mahākassapa presiding, the five hundred arahant monks met in council during Vassa. The first thing Mahākassapa did was to question the foremost expert on the Vinaya of the day, Upali, on particulars of the monastic rule. Mahākassapa asked him specifically about the ruling on the first parajika, with regard to the subject, the occasion, the individual introduced, the proclamation, the repetition of the proclamation, the offense and the case of non-offense. Upali gave knowledgeable and adequate answers and his remarks met with the unanimous approval of the presiding Sangha. Thus, the Vinaya was formally approved.

The Mahākassapa then turned his attention to Ananda in virtue of his reputable expertise in all matters connected with the Dhamma. The night before the Council was to meet, Ananda had attained Arahantship and joined the Council.[1][5] Mahākassapa was able to question him at length about the Dhamma with specific reference to the Buddha's sermons. This interrogation on the Dhamma sought to verify the place where all the discourses were first preached and the person to whom they had been addressed.

Ananda aided by his word-perfect memory was able to answer accurately and so the Discourses met with the unanimous approval of the Sangha. The First Council also gave its official seal of approval for the closure of the chapter on the minor and lesser rules, and approval for their observance. It took the monks seven months to recite the whole of the Vinaya and the Dhamma and those monks sufficiently endowed with good memories retained all that had been recited. This historic first council came to be known as the Pancasatika because five hundred fully enlightened Arahants had taken part in it.