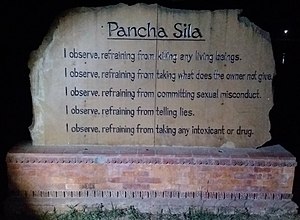 In brief, the five precepts are to refrain from:

For lay people, the five precepts are not formulated as imperatives, but as training rules that lay people undertake voluntarily to facilitate practice.[4] Peter Harvey states:

Each precept is a ‘rule of training’ – as is each item of the monastic code – which is a promise or vow to oneself. They are not ‘commandments’ from without, though their difference from these, in practice, can be exaggerated. In societies where Buddhism is the dominant religion, they become broadly expected norms for people to seek to live by. Moreover, while the ‘taking’ of the precepts, by ritually chanting them, can be done by a layperson at any time, they are frequently ‘taken’ by chanting them after a monk, who fulfils the role of ‘administering’ them. In such a context, the resolve to keep the precepts has a greater psychological impact, and thus generates more karmic fruitfulness.[5]

In Thailand, a leading lay person will normally request the monk to administer the precepts.

In the Theravāda tradition, the precepts are recited in a standardized fashion, in the Pāli language. In Thailand, a leading lay person will normally request the monk to administer the precepts by reciting the following three times:

"Venerables, we request the five precepts and the three refuges [i.e. the triple gem] for the sake of observing them, one by one, separately". (Mayaṃ bhante visuṃ visuṃ rakkhaṇatthāya tisaraṇena saha pañca sīlāniyācāma.)[6]

After this, the monk administering the precepts will recite a reverential line of text to introduce the ceremony, after which he guides the lay people in declaring that they take their refuge in the three refuges or triple gem.[7]

He then continues with reciting the five precepts:[8][9]

After the lay people have repeated the five precepts after the monk, the monk will close the ceremony reciting:

The format of the ceremony for taking the precepts occurs several times in the Chinese Buddhist Canon, in slightly different forms.[11]

One formula of the precepts can be found in the Treatise on Taking Refuge and the Precepts (simplified Chinese: 归戒要集; traditional Chinese: 歸戒要集; pinyin: Guījiè Yāojí):

Similarly, in the Mūla-Sarvāstivāda texts used in Tibetan Buddhism, the precepts are formulated such that one takes the precepts upon oneself for one's entire lifespan, following the examples of the enlightened disciples of the Buddha (arahant).[8]

The five precepts can be found in many places in the Early Buddhist Texts.[17] The precepts are regarded as means to building good character, or as an expression of such character. The Pāli Canon describes them as means to avoid harm to oneself and others.[18] It further describes them as gifts toward oneself and others.[19] Moreover, the texts say that people who uphold them will be confident in any gathering of people,[20] [21] will have wealth and a good reputation, and will die a peaceful death, reborn in heaven[8][21] or as a human being. On the other hand, living a life in violation of the precepts is believed to lead to rebirth in the lower realms.[20] They are understood as principles that define a person as human in body and mind.[22]

The precepts are normative rules, but are formulated and understood as "undertakings"[23] rather than commandments enforced by a moral authority,[24][25] according to the voluntary and gradualist standards of Buddhist ethics.[26] They are forms of restraint formulated in negative terms, but are also accompanied by virtues and positive behaviors,[13][27][14] which are cultivated through the practice of the precepts.[28][note 1] The most important of these virtues is non-harming (Pāli and Sanskrit: ahiṃsa),[30][31] which underlies all of the five precepts.[14][note 2] Precisely, the texts say that one should keep the precepts, adhering to the principle of comparing oneself with others:[33]

In other words, all living beings are alike in that they want to be happy and not suffer. Comparing oneself with others, one should therefore not hurt others as one would not want to be hurt.[35] Ethicist Pinit Ratanakul argues that the compassion which motivates upholding the precepts comes from an understanding that all living beings are equal and of a nature that they are 'not-self' (Pali: anattā).[36] Another aspect that is fundamental to this is the belief in karmic retribution.[37]

In the upholding or violation of the precepts, intention is crucial.[38][39] In the Pāli scriptures, an example is mentioned of a person stealing an animal only to set it free, which was not seen as an offense of theft.[38] In the Pāli commentaries, a precept is understood to be violated when the person violating it finds the object of the transgression (e.g. things to be stolen), is aware of the violation, has the intention to violate it, does actually act on that intention, and does so successfully.[40]

Upholding the precepts is sometimes distinguished in three levels: to uphold them without having formally undertaken them; to uphold them formally, willing to sacrifice one's own life for it; and finally, to spontaneously uphold them.[41] The latter refers to the arahant, who is understood to be morally incapable of violating the first four precepts.[42] A layperson who upholds the precepts is described in the texts as a "jewel among laymen".[43] On the other hand, the most serious violations of the precepts are the five actions of immediate retribution, which are believed to lead the perpetrator to an unavoidable rebirth in a hell realm. These consist of injuring a Buddha, killing an arahant, killing one's father or mother, and causing the monastic community to have a schism.[14]