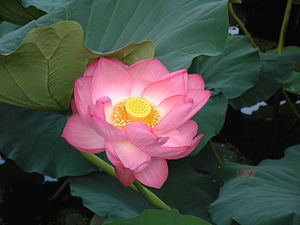 The lotus flower, the species of flower said to have been used during the Flower Sermon.

The Flower Sermon is a story of the origin of Zen Buddhism in which Śākyamuni Buddha (Siddhartha Gautama) transmits direct prajñā (wisdom) to the disciple Mahākāśyapa. In the original Chinese, the story is Niān huá wéi xiào (拈華微笑, literally "Pick up flower, subtle smile").

In the story, Śākyamuni gives a wordless sermon to his disciples (sangha) by holding up a white flower. No one in the audience understands the Flower Sermon except Mahākāśyapa, who smiles. Within Zen, the Flower Sermon communicates the ineffable nature of tathātā (suchness) and Mahākāśyapa's smile signifies the direct transmission of wisdom without words. Śākyamuni affirmed this by saying:

I possess the true Dharma eye, the marvelous mind of Nirvana, the true form of the formless, the subtle [D]harma [G]ate that does not rest on words or letters but is a special transmission outside of the scriptures. This I entrust to Mahākāśyapa.[1]

Jung and Kerényi demonstrate a possible commonality in intent between the Flower Sermon and the Eleusinian Mysteries:

One day the Buddha silently held up a flower before the assembled throng of his disciples. This was the famous "Flower Sermon." Formally speaking, much the same thing happened in Eleusis when a mown ear of grain was silently shown. Even if our interpretation of this symbol is erroneous, the fact remains that a mown ear was shown in the course of the mysteries and that this kind of "wordless sermon" was the sole form of instruction in Eleusis which we may assume with certainty.[2]

The story of the Flower Sermon appears to have been created by Chinese Chán Buddhists.[3] The earliest known version of the tale appeared in 1036.[3]