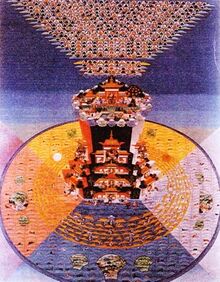 Mount Meru surrounded by the continents and subcontinents, with the gods of the Desire and Form Realms above

This realm is characterized by the internal bliss of absorption.[1] If explained further by means of body, feelings, and resources: "beings there have bodies in the nature of light, their experience is permeated mostly by feelings of bliss, and they do not rely on coarse food."[1] The beings who live in this realm are considered to be celestial beings.[1]

This realm is divided into four sub-realms, which are further divided into additional sub-realms or heavens. In the Sanskrit tradition, there are seventeen heavens in total; in the Pali tradition there is one less heaven, for a total of sixteen heavens.

The cause for being reborn in one of these heavens is the favourable karma accumulated through the practice of one of the dhyanas, each 'causal meditative dhyana' acting as a cause of rebirth in one of the corresponding 'resultant dhyana levels'.[2]

Divisions of the form realm

These sub-realms are divided further, giving a total of seventeen heavens of the of the form realm (Skt. rupadhatuvasiñjati; T. gzugs khams gnas ri bcu bdun, གཟུགས་ཁམས་གནས་རི་བཅུ་བདུན་), according to the Sanskrit tradition.

The five uppermost realms are called the "five pure abodes" (śuddhāvāsa). These realms are only accessible to noble beings (arya sangha).

These are the highest abodes accessible to ordinary beings.